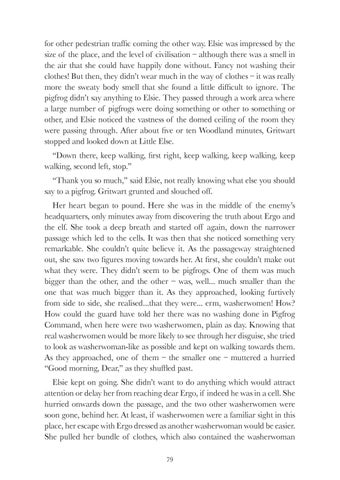 for other pedestrian traffic coming the other way. Elsie was impressed by the size of the place, and the level of civilisation – although there was a smell in the air that she could have happily done without. Fancy not washing their clothes! But then, they didn’t wear much in the way of clothes – it was really more the sweaty body smell that she found a little difficult to ignore. The pigfrog didn’t say anything to Elsie. They passed through a work area where a large number of pigfrogs were doing something or other to something or other, and Elsie noticed the vastness of the domed ceiling of the room they were passing through. After about five or ten Woodland minutes, Gritwart stopped and looked down at Little Else. “Down there, keep walking, first right, keep walking, keep walking, keep walking, second left, stop.” “Thank you so much,” said Elsie, not really knowing what else you should say to a pigfrog. Gritwart grunted and slouched off. Her heart began to pound. Here she was in the middle of the enemy’s headquarters, only minutes away from discovering the truth about Ergo and the elf. She took a deep breath and started off again, down the narrower passage which led to the cells. It was then that she noticed something very remarkable. She couldn’t quite believe it. As the passageway straightened out, she saw two figures moving towards her. At first, she couldn’t make out what they were. They didn’t seem to be pigfrogs. One of them was much bigger than the other, and the other – was, well... much smaller than the one that was much bigger than it. As they approached, looking furtively from side to side, she realised...that they were... erm, washerwomen! How? How could the guard have told her there was no washing done in Pigfrog Command, when here were two washerwomen, plain as day. Knowing that real washerwomen would be more likely to see through her disguise, she tried to look as washerwoman-like as possible and kept on walking towards them. As they approached, one of them – the smaller one – muttered a hurried “Good morning, Dear,” as they shuffled past. Elsie kept on going. She didn’t want to do anything which would attract attention or delay her from reaching dear Ergo, if indeed he was in a cell. She hurried onwards down the passage, and the two other washerwomen were soon gone, behind her. At least, if washerwomen were a familiar sight in this place, her escape with Ergo dressed as another washerwoman would be easier. She pulled her bundle of clothes, which also contained the washerwoman 79