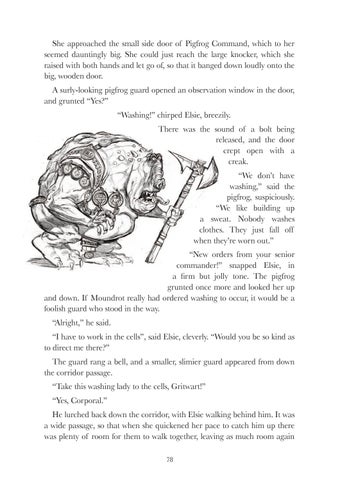 She approached the small side door of Pigfrog Command, which to her seemed dauntingly big. She could just reach the large knocker, which she raised with both hands and let go of, so that it banged down loudly onto the big, wooden door. A surly-looking pigfrog guard opened an observation window in the door, and grunted “Yes?” “Washing!” chirped Elsie, breezily. There was the sound of a bolt being released, and the door crept open with a creak. “We don’t have washing,” said the pigfrog, suspiciously. “We like building up a sweat. Nobody washes clothes. They just fall off when they’re worn out.” “New orders from your senior commander!” snapped Elsie, in a firm but jolly tone. The pigfrog grunted once more and looked her up and down. If Moundrot really had ordered washing to occur, it would be a foolish guard who stood in the way. “Alright,” he said. “I have to work in the cells”, said Elsie, cleverly. “Would you be so kind as to direct me there?” The guard rang a bell, and a smaller, slimier guard appeared from down the corridor passage. “Take this washing lady to the cells, Gritwart!” “Yes, Corporal.” He lurched back down the corridor, with Elsie walking behind him. It was a wide passage, so that when she quickened her pace to catch him up there was plenty of room for them to walk together, leaving as much room again 78