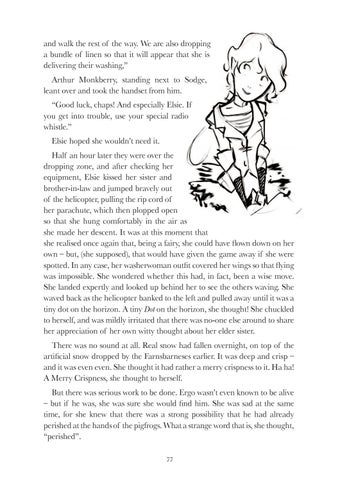 and walk the rest of the way. We are also dropping a bundle of linen so that it will appear that she is delivering their washing,” Arthur Monkberry, standing next to Sodge, leant over and took the handset from him. “Good luck, chaps! And especially Elsie. If you get into trouble, use your special radio whistle.” Elsie hoped she wouldn’t need it. Half an hour later they were over the dropping zone, and after checking her equipment, Elsie kissed her sister and brother-in-law and jumped bravely out of the helicopter, pulling the rip cord of her parachute, which then plopped open so that she hung comfortably in the air as she made her descent. It was at this moment that she realised once again that, being a fairy, she could have flown down on her own – but, (she supposed), that would have given the game away if she were spotted. In any case, her washerwoman outfit covered her wings so that flying was impossible. She wondered whether this had, in fact, been a wise move. She landed expertly and looked up behind her to see the others waving. She waved back as the helicopter banked to the left and pulled away until it was a tiny dot on the horizon. A tiny Dot on the horizon, she thought! She chuckled to herself, and was mildly irritated that there was no-one else around to share her appreciation of her own witty thought about her elder sister. There was no sound at all. Real snow had fallen overnight, on top of the artificial snow dropped by the Farnsbarneses earlier. It was deep and crisp – and it was even even. She thought it had rather a merry crispness to it. Ha ha! A Merry Crispness, she thought to herself. But there was serious work to be done. Ergo wasn’t even known to be alive – but if he was, she was sure she would find him. She was sad at the same time, for she knew that there was a strong possibility that he had already perished at the hands of the pigfrogs. What a strange word that is, she thought, “perished”. 77