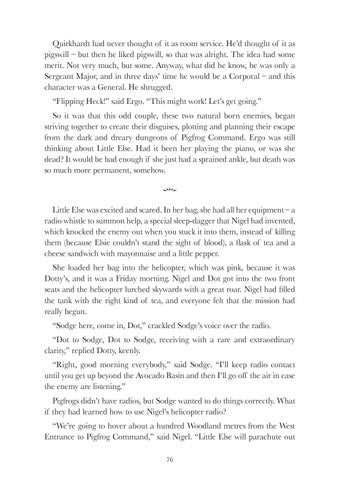 Quirkhardt had never thought of it as room service. He’d thought of it as pigswill – but then he liked pigswill, so that was alright. The idea had some merit. Not very much, but some. Anyway, what did he know, he was only a Sergeant Major, and in three days’ time he would be a Corporal – and this character was a General. He shrugged. “Flipping Heck!” said Ergo. “This might work! Let’s get going.” So it was that this odd couple, these two natural born enemies, began striving together to create their disguises, plotting and planning their escape from the dark and dreary dungeons of Pigfrog Command. Ergo was still thinking about Little Else. Had it been her playing the piano, or was she dead? It would be bad enough if she just had a sprained ankle, but death was so much more permanent, somehow. 5 Little Else was excited and scared. In her bag, she had all her equipment – a radio whistle to summon help, a special sleep-dagger that Nigel had invented, which knocked the enemy out when you stuck it into them, instead of killing them (because Elsie couldn’t stand the sight of blood), a flask of tea and a cheese sandwich with mayonnaise and a little pepper. She loaded her bag into the helicopter, which was pink, because it was Dotty’s, and it was a Friday morning. Nigel and Dot got into the two front seats and the helicopter lurched skywards with a great roar. Nigel had filled the tank with the right kind of tea, and everyone felt that the mission had really begun. “Sodge here, come in, Dot,” crackled Sodge’s voice over the radio. “Dot to Sodge, Dot to Sodge, receiving with a rare and extraordinary clarity,” replied Dotty, keenly. “Right, good morning everybody,” said Sodge. “I’ll keep radio contact until you get up beyond the Avocado Basin and then I’ll go off the air in case the enemy are listening.” Pigfrogs didn’t have radios, but Sodge wanted to do things correctly. What if they had learned how to use Nigel’s helicopter radio? “We’re going to hover about a hundred Woodland metres from the West Entrance to Pigfrog Command,” said Nigel. “Little Else will parachute out 76