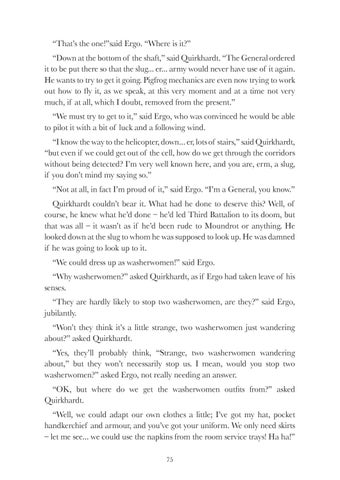 “That’s the one!”said Ergo. “Where is it?” “Down at the bottom of the shaft,” said Quirkhardt. “The General ordered it to be put there so that the slug... er... army would never have use of it again. He wants to try to get it going. Pigfrog mechanics are even now trying to work out how to fly it, as we speak, at this very moment and at a time not very much, if at all, which I doubt, removed from the present.” “We must try to get to it,” said Ergo, who was convinced he would be able to pilot it with a bit of luck and a following wind. “I know the way to the helicopter, down... er, lots of stairs,” said Quirkhardt, “but even if we could get out of the cell, how do we get through the corridors without being detected? I’m very well known here, and you are, erm, a slug, if you don’t mind my saying so.” “Not at all, in fact I’m proud of it,” said Ergo. “I’m a General, you know.” Quirkhardt couldn’t bear it. What had he done to deserve this? Well, of course, he knew what he’d done – he’d led Third Battalion to its doom, but that was all – it wasn’t as if he’d been rude to Moundrot or anything. He looked down at the slug to whom he was supposed to look up. He was damned if he was going to look up to it. “We could dress up as washerwomen!” said Ergo. “Why washerwomen?” asked Quirkhardt, as if Ergo had taken leave of his senses. “They are hardly likely to stop two washerwomen, are they?” said Ergo, jubilantly. “Won’t they think it’s a little strange, two washerwomen just wandering about?” asked Quirkhardt. “Yes, they’ll probably think, “Strange, two washerwomen wandering about,” but they won’t necessarily stop us. I mean, would you stop two washerwomen?” asked Ergo, not really needing an answer. “OK, but where do we get the washerwomen outfits from?” asked Quirkhardt. “Well, we could adapt our own clothes a little; I’ve got my hat, pocket handkerchief and armour, and you’ve got your uniform. We only need skirts – let me see... we could use the napkins from the room service trays! Ha ha!” 75