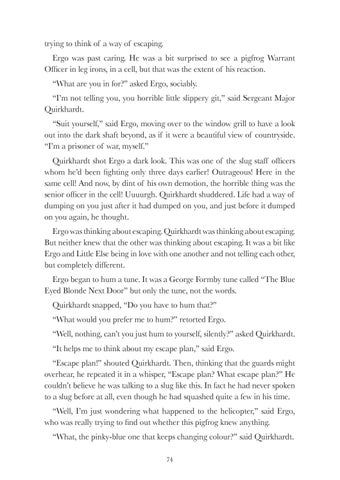 trying to think of a way of escaping. Ergo was past caring. He was a bit surprised to see a pigfrog Warrant Officer in leg irons, in a cell, but that was the extent of his reaction. “What are you in for?” asked Ergo, sociably. “I’m not telling you, you horrible little slippery git,” said Sergeant Major Quirkhardt. “Suit yourself,” said Ergo, moving over to the window grill to have a look out into the dark shaft beyond, as if it were a beautiful view of countryside. “I’m a prisoner of war, myself.” Quirkhardt shot Ergo a dark look. This was one of the slug staff officers whom he’d been fighting only three days earlier! Outrageous! Here in the same cell! And now, by dint of his own demotion, the horrible thing was the senior officer in the cell! Uuuurgh. Quirkhardt shuddered. Life had a way of dumping on you just after it had dumped on you, and just before it dumped on you again, he thought. Ergo was thinking about escaping. Quirkhardt was thinking about escaping. But neither knew that the other was thinking about escaping. It was a bit like Ergo and Little Else being in love with one another and not telling each other, but completely different. Ergo began to hum a tune. It was a George Formby tune called “The Blue Eyed Blonde Next Door” but only the tune, not the words. Quirkhardt snapped, “Do you have to hum that?” “What would you prefer me to hum?” retorted Ergo. “Well, nothing, can’t you just hum to yourself, silently?” asked Quirkhardt. “It helps me to think about my escape plan,” said Ergo. “Escape plan!” shouted Quirkhardt. Then, thinking that the guards might overhear, he repeated it in a whisper, “Escape plan? What escape plan?” He couldn’t believe he was talking to a slug like this. In fact he had never spoken to a slug before at all, even though he had squashed quite a few in his time. “Well, I’m just wondering what happened to the helicopter,” said Ergo, who was really trying to find out whether this pigfrog knew anything. “What, the pinky-blue one that keeps changing colour?” said Quirkhardt. 74