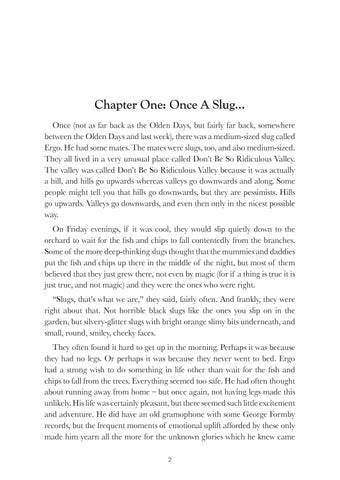 Chapter One: Once A Slug... Once (not as far back as the Olden Days, but fairly far back, somewhere between the Olden Days and last week), there was a medium-sized slug called Ergo. He had some mates. The mates were slugs, too, and also medium-sized. They all lived in a very unusual place called Don’t Be So Ridiculous Valley. The valley was called Don’t Be So Ridiculous Valley because it was actually a hill, and hills go upwards whereas valleys go downwards and along. Some people might tell you that hills go downwards, but they are pessimists. Hills go upwards. Valleys go downwards, and even then only in the nicest possible way. On Friday evenings, if it was cool, they would slip quietly down to the orchard to wait for the fish and chips to fall contentedly from the branches. Some of the more deep-thinking slugs thought that the mummies and daddies put the fish and chips up there in the middle of the night, but most of them believed that they just grew there, not even by magic (for if a thing is true it is just true, and not magic) and they were the ones who were right. “Slugs, that’s what we are,” they said, fairly often. And frankly, they were right about that. Not horrible black slugs like the ones you slip on in the garden, but silvery-glitter slugs with bright orange slimy bits underneath, and small, round, smiley, cheeky faces. They often found it hard to get up in the morning. Perhaps it was because they had no legs. Or perhaps it was because they never went to bed. Ergo had a strong wish to do something in life other than wait for the fish and chips to fall from the trees. Everything seemed too safe. He had often thought about running away from home – but once again, not having legs made this unlikely. His life was certainly pleasant, but there seemed such little excitement and adventure. He did have an old gramophone with some George Formby records, but the frequent moments of emotional uplift afforded by these only made him yearn all the more for the unknown glories which he knew came 2