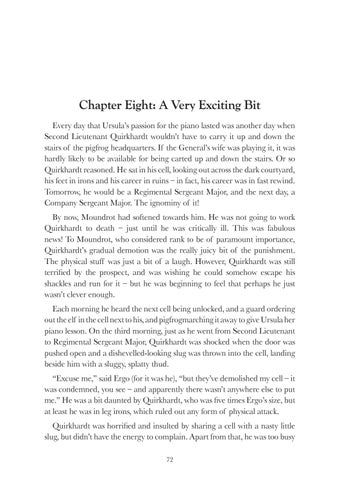 Chapter Eight: A Very Exciting Bit Every day that Ursula’s passion for the piano lasted was another day when Second Lieutenant Quirkhardt wouldn’t have to carry it up and down the stairs of the pigfrog headquarters. If the General’s wife was playing it, it was hardly likely to be available for being carted up and down the stairs. Or so Quirkhardt reasoned. He sat in his cell, looking out across the dark courtyard, his feet in irons and his career in ruins – in fact, his career was in fast rewind. Tomorrow, he would be a Regimental Sergeant Major, and the next day, a Company Sergeant Major. The ignominy of it! By now, Moundrot had softened towards him. He was not going to work Quirkhardt to death – just until he was critically ill. This was fabulous news! To Moundrot, who considered rank to be of paramount importance, Quirkhardt’s gradual demotion was the really juicy bit of the punishment. The physical stuff was just a bit of a laugh. However, Quirkhardt was still terrified by the prospect, and was wishing he could somehow escape his shackles and run for it – but he was beginning to feel that perhaps he just wasn’t clever enough. Each morning he heard the next cell being unlocked, and a guard ordering out the elf in the cell next to his, and pigfrogmarching it away to give Ursula her piano lesson. On the third morning, just as he went from Second Lieutenant to Regimental Sergeant Major, Quirkhardt was shocked when the door was pushed open and a dishevelled-looking slug was thrown into the cell, landing beside him with a sluggy, splatty thud. “Excuse me,” said Ergo (for it was he), “but they’ve demolished my cell – it was condemned, you see – and apparently there wasn’t anywhere else to put me.” He was a bit daunted by Quirkhardt, who was five times Ergo’s size, but at least he was in leg irons, which ruled out any form of physical attack. Quirkhardt was horrified and insulted by sharing a cell with a nasty little slug, but didn’t have the energy to complain. Apart from that, he was too busy 72