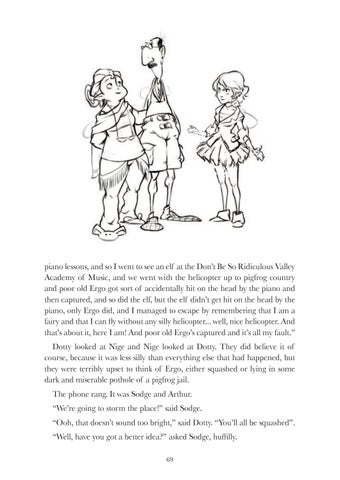 piano lessons, and so I went to see an elf at the Don’t Be So Ridiculous Valley Academy of Music, and we went with the helicopter up to pigfrog country and poor old Ergo got sort of accidentally hit on the head by the piano and then captured, and so did the elf, but the elf didn’t get hit on the head by the piano, only Ergo did, and I managed to escape by remembering that I am a fairy and that I can fly without any silly helicopter... well, nice helicopter. And that’s about it, here I am! And poor old Ergo’s captured and it’s all my fault.” Dotty looked at Nige and Nige looked at Dotty. They did believe it of course, because it was less silly than everything else that had happened, but they were terribly upset to think of Ergo, either squashed or lying in some dark and miserable pothole of a pigfrog jail. The phone rang. It was Sodge and Arthur. “We’re going to storm the place!” said Sodge. “Ooh, that doesn’t sound too bright,” said Dotty. “You’ll all be squashed”. “Well, have you got a better idea?” asked Sodge, huffilly. 69