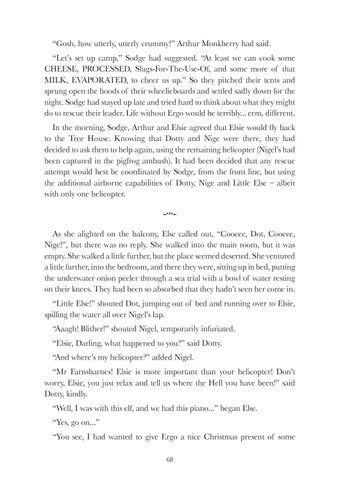 “Gosh, how utterly, utterly crummy!” Arthur Monkberry had said. “Let’s set up camp,” Sodge had suggested. “At least we can cook some CHEESE, PROCESSED, Slugs-For-The-Use-Of, and some more of that MILK, EVAPORATED, to cheer us up.” So they pitched their tents and sprung open the hoods of their wheelieboards and settled sadly down for the night. Sodge had stayed up late and tried hard to think about what they might do to rescue their leader. Life without Ergo would be terribly... erm, different. In the morning, Sodge, Arthur and Elsie agreed that Elsie would fly back to the Tree House. Knowing that Dotty and Nige were there, they had decided to ask them to help again, using the remaining helicopter (Nigel’s had been captured in the pigfrog ambush). It had been decided that any rescue attempt would best be coordinated by Sodge, from the front line, but using the additional airborne capabilities of Dotty, Nige and Little Else – albeit with only one helicopter. 5 As she alighted on the balcony, Else called out, “Cooeee, Dot, Cooeee, Nige!”, but there was no reply. She walked into the main room, but it was empty. She walked a little further, but the place seemed deserted. She ventured a little further, into the bedroom, and there they were, sitting up in bed, putting the underwater onion peeler through a sea trial with a bowl of water resting on their knees. They had been so absorbed that they hadn’t seen her come in. “Little Else!” shouted Dot, jumping out of bed and running over to Elsie, spilling the water all over Nigel’s lap. “Aaagh! Blither!” shouted Nigel, temporarily infuriated. “Elsie, Darling, what happened to you?” said Dotty. “And where’s my helicopter?” added Nigel. “Mr Farnsbarnes! Elsie is more important than your helicopter! Don’t worry, Elsie, you just relax and tell us where the Hell you have been!” said Dotty, kindly. “Well, I was with this elf, and we had this piano...” began Else. “Yes, go on...” “You see, I had wanted to give Ergo a nice Christmas present of some 68