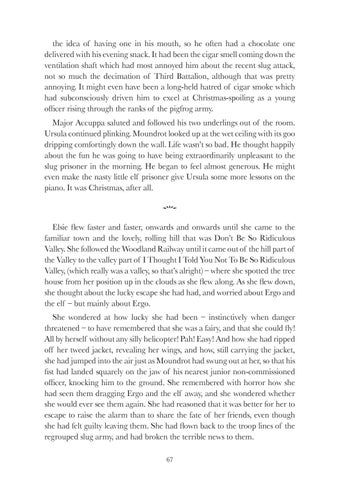 the idea of having one in his mouth, so he often had a chocolate one delivered with his evening snack. It had been the cigar smell coming down the ventilation shaft which had most annoyed him about the recent slug attack, not so much the decimation of Third Battalion, although that was pretty annoying. It might even have been a long-held hatred of cigar smoke which had subconsciously driven him to excel at Christmas-spoiling as a young officer rising through the ranks of the pigfrog army. Major Accuppa saluted and followed his two underlings out of the room. Ursula continued plinking. Moundrot looked up at the wet ceiling with its goo dripping comfortingly down the wall. Life wasn’t so bad. He thought happily about the fun he was going to have being extraordinarily unpleasant to the slug prisoner in the morning. He began to feel almost generous. He might even make the nasty little elf prisoner give Ursula some more lessons on the piano. It was Christmas, after all. 5 Elsie flew faster and faster, onwards and onwards until she came to the familiar town and the lovely, rolling hill that was Don’t Be So Ridiculous Valley. She followed the Woodland Railway until it came out of the hill part of the Valley to the valley part of I Thought I Told You Not To Be So Ridiculous Valley, (which really was a valley, so that’s alright) – where she spotted the tree house from her position up in the clouds as she flew along. As she flew down, she thought about the lucky escape she had had, and worried about Ergo and the elf – but mainly about Ergo. She wondered at how lucky she had been – instinctively when danger threatened – to have remembered that she was a fairy, and that she could fly! All by herself without any silly helicopter! Pah! Easy! And how she had ripped off her tweed jacket, revealing her wings, and how, still carrying the jacket, she had jumped into the air just as Moundrot had swung out at her, so that his fist had landed squarely on the jaw of his nearest junior non-commissioned officer, knocking him to the ground. She remembered with horror how she had seen them dragging Ergo and the elf away, and she wondered whether she would ever see them again. She had reasoned that it was better for her to escape to raise the alarm than to share the fate of her friends, even though she had felt guilty leaving them. She had flown back to the troop lines of the regrouped slug army, and had broken the terrible news to them. 67