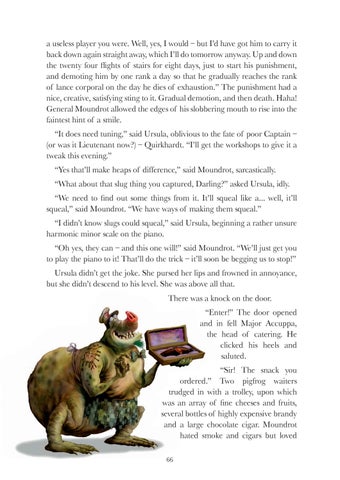 a useless player you were. Well, yes, I would – but I’d have got him to carry it back down again straight away, which I’ll do tomorrow anyway. Up and down the twenty four flights of stairs for eight days, just to start his punishment, and demoting him by one rank a day so that he gradually reaches the rank of lance corporal on the day he dies of exhaustion.” The punishment had a nice, creative, satisfying sting to it. Gradual demotion, and then death. Haha! General Moundrot allowed the edges of his slobbering mouth to rise into the faintest hint of a smile. “It does need tuning,” said Ursula, oblivious to the fate of poor Captain – (or was it Lieutenant now?) – Quirkhardt. “I’ll get the workshops to give it a tweak this evening.” “Yes that’ll make heaps of difference,” said Moundrot, sarcastically. “What about that slug thing you captured, Darling?” asked Ursula, idly. “We need to find out some things from it. It’ll squeal like a... well, it’ll squeal,” said Moundrot. “We have ways of making them squeal.” “I didn’t know slugs could squeal,” said Ursula, beginning a rather unsure harmonic minor scale on the piano. “Oh yes, they can – and this one will!” said Moundrot. “We’ll just get you to play the piano to it! That’ll do the trick – it’ll soon be begging us to stop!” Ursula didn’t get the joke. She pursed her lips and frowned in annoyance, but she didn’t descend to his level. She was above all that. There was a knock on the door. “Enter!” The door opened and in fell Major Accuppa, the head of catering. He clicked his heels and saluted. “Sir! The snack you ordered.” Two pigfrog waiters trudged in with a trolley, upon which was an array of fine cheeses and fruits, several bottles of highly expensive brandy and a large chocolate cigar. Moundrot hated smoke and cigars but loved 66