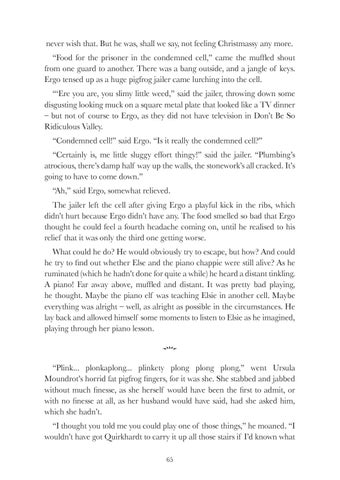 never wish that. But he was, shall we say, not feeling Christmassy any more. “Food for the prisoner in the condemned cell,” came the muffled shout from one guard to another. There was a bang outside, and a jangle of keys. Ergo tensed up as a huge pigfrog jailer came lurching into the cell. “‘Ere you are, you slimy little weed,” said the jailer, throwing down some disgusting looking muck on a square metal plate that looked like a TV dinner – but not of course to Ergo, as they did not have television in Don’t Be So Ridiculous Valley. “Condemned cell!” said Ergo. “Is it really the condemned cell?” “Certainly is, me little sluggy effort thingy!” said the jailer. “Plumbing’s atrocious, there’s damp half way up the walls, the stonework’s all cracked. It’s going to have to come down.” “Ah,” said Ergo, somewhat relieved. The jailer left the cell after giving Ergo a playful kick in the ribs, which didn’t hurt because Ergo didn’t have any. The food smelled so bad that Ergo thought he could feel a fourth headache coming on, until he realised to his relief that it was only the third one getting worse. What could he do? He would obviously try to escape, but how? And could he try to find out whether Else and the piano chappie were still alive? As he ruminated (which he hadn’t done for quite a while) he heard a distant tinkling. A piano! Far away above, muffled and distant. It was pretty bad playing, he thought. Maybe the piano elf was teaching Elsie in another cell. Maybe everything was alright – well, as alright as possible in the circumstances. He lay back and allowed himself some moments to listen to Elsie as he imagined, playing through her piano lesson. 5 “Plink... plonkaplong... plinkety plong plong plong,” went Ursula Moundrot’s horrid fat pigfrog fingers, for it was she. She stabbed and jabbed without much finesse, as she herself would have been the first to admit, or with no finesse at all, as her husband would have said, had she asked him, which she hadn’t. “I thought you told me you could play one of those things,” he moaned. “I wouldn’t have got Quirkhardt to carry it up all those stairs if I’d known what 65