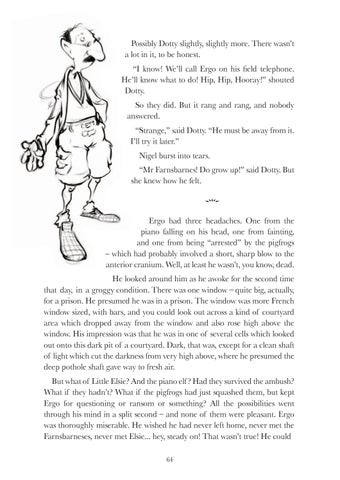 Possibly Dotty slightly, slightly more. There wasn’t a lot in it, to be honest. “I know! We’ll call Ergo on his field telephone. He’ll know what to do! Hip, Hip, Hooray!” shouted Dotty. So they did. But it rang and rang, and nobody answered. “Strange,” said Dotty. “He must be away from it. I’ll try it later.” Nigel burst into tears. “Mr Farnsbarnes! Do grow up!” said Dotty. But she knew how he felt. 5 Ergo had three headaches. One from the piano falling on his head, one from fainting, and one from being “arrested” by the pigfrogs – which had probably involved a short, sharp blow to the anterior cranium. Well, at least he wasn’t, you know, dead. He looked around him as he awoke for the second time that day, in a groggy condition. There was one window – quite big, actually, for a prison. He presumed he was in a prison. The window was more French window sized, with bars, and you could look out across a kind of courtyard area which dropped away from the window and also rose high above the window. His impression was that he was in one of several cells which looked out onto this dark pit of a courtyard. Dark, that was, except for a clean shaft of light which cut the darkness from very high above, where he presumed the deep pothole shaft gave way to fresh air. But what of Little Elsie? And the piano elf ? Had they survived the ambush? What if they hadn’t? What if the pigfrogs had just squashed them, but kept Ergo for questioning or ransom or something? All the possibilities went through his mind in a split second – and none of them were pleasant. Ergo was thoroughly miserable. He wished he had never left home, never met the Farnsbarneses, never met Elsie... hey, steady on! That wasn’t true! He could 64