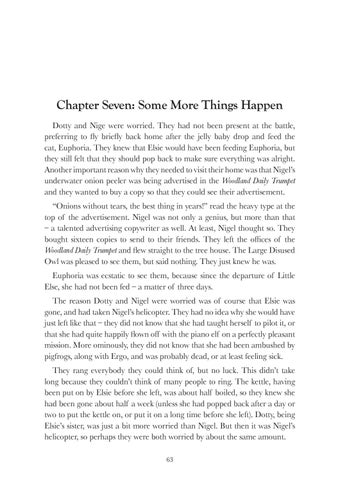 Chapter Seven: Some More Things Happen Dotty and Nige were worried. They had not been present at the battle, preferring to fly briefly back home after the jelly baby drop and feed the cat, Euphoria. They knew that Elsie would have been feeding Euphoria, but they still felt that they should pop back to make sure everything was alright. Another important reason why they needed to visit their home was that Nigel’s underwater onion peeler was being advertised in the Woodland Daily Trumpet and they wanted to buy a copy so that they could see their advertisement. “Onions without tears, the best thing in years!” read the heavy type at the top of the advertisement. Nigel was not only a genius, but more than that – a talented advertising copywriter as well. At least, Nigel thought so. They bought sixteen copies to send to their friends. They left the offices of the Woodland Daily Trumpet and flew straight to the tree house. The Large Disused Owl was pleased to see them, but said nothing. They just knew he was. Euphoria was ecstatic to see them, because since the departure of Little Else, she had not been fed – a matter of three days. The reason Dotty and Nigel were worried was of course that Elsie was gone, and had taken Nigel’s helicopter. They had no idea why she would have just left like that – they did not know that she had taught herself to pilot it, or that she had quite happily flown off with the piano elf on a perfectly pleasant mission. More ominously, they did not know that she had been ambushed by pigfrogs, along with Ergo, and was probably dead, or at least feeling sick. They rang everybody they could think of, but no luck. This didn’t take long because they couldn’t think of many people to ring. The kettle, having been put on by Elsie before she left, was about half boiled, so they knew she had been gone about half a week (unless she had popped back after a day or two to put the kettle on, or put it on a long time before she left). Dotty, being Elsie’s sister, was just a bit more worried than Nigel. But then it was Nigel’s helicopter, so perhaps they were both worried by about the same amount. 63