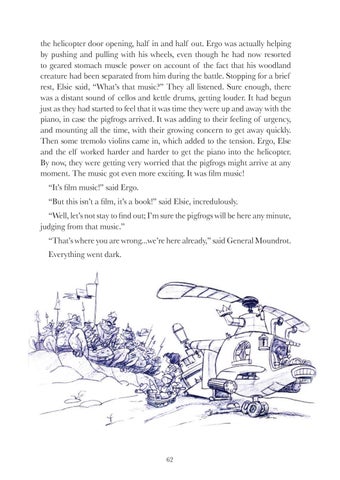 the helicopter door opening, half in and half out. Ergo was actually helping by pushing and pulling with his wheels, even though he had now resorted to geared stomach muscle power on account of the fact that his woodland creature had been separated from him during the battle. Stopping for a brief rest, Elsie said, “What’s that music?” They all listened. Sure enough, there was a distant sound of cellos and kettle drums, getting louder. It had begun just as they had started to feel that it was time they were up and away with the piano, in case the pigfrogs arrived. It was adding to their feeling of urgency, and mounting all the time, with their growing concern to get away quickly. Then some tremolo violins came in, which added to the tension. Ergo, Else and the elf worked harder and harder to get the piano into the helicopter. By now, they were getting very worried that the pigfrogs might arrive at any moment. The music got even more exciting. It was film music! “It’s film music!” said Ergo. “But this isn’t a film, it’s a book!” said Elsie, incredulously. “Well, let’s not stay to find out; I’m sure the pigfrogs will be here any minute, judging from that music.” “That’s where you are wrong...we’re here already,” said General Moundrot. Everything went dark.