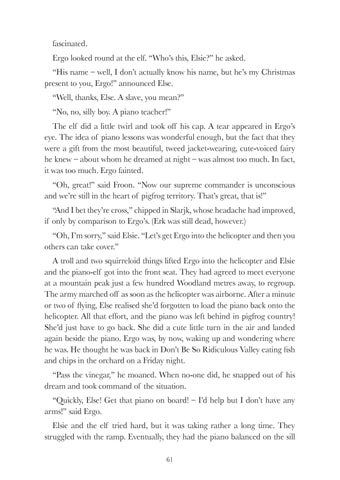 fascinated. Ergo looked round at the elf. “Who’s this, Elsie?” he asked. “His name – well, I don’t actually know his name, but he’s my Christmas present to you, Ergo!” announced Else. “Well, thanks, Else. A slave, you mean?” “No, no, silly boy. A piano teacher!” The elf did a little twirl and took off his cap. A tear appeared in Ergo’s eye. The idea of piano lessons was wonderful enough, but the fact that they were a gift from the most beautiful, tweed jacket-wearing, cute-voiced fairy he knew – about whom he dreamed at night – was almost too much. In fact, it was too much. Ergo fainted. “Oh, great!” said Froon. “Now our supreme commander is unconscious and we’re still in the heart of pigfrog territory. That’s great, that is!” “And I bet they’re cross,” chipped in Slarjk, whose headache had improved, if only by comparison to Ergo’s. (Erk was still dead, however.) “Oh, I’m sorry,” said Elsie. “Let’s get Ergo into the helicopter and then you others can take cover.” A troll and two squirreloid things lifted Ergo into the helicopter and Elsie and the piano-elf got into the front seat. They had agreed to meet everyone at a mountain peak just a few hundred Woodland metres away, to regroup. The army marched off as soon as the helicopter was airborne. After a minute or two of flying, Else realised she’d forgotten to load the piano back onto the helicopter. All that effort, and the piano was left behind in pigfrog country! She’d just have to go back. She did a cute little turn in the air and landed again beside the piano. Ergo was, by now, waking up and wondering where he was. He thought he was back in Don’t Be So Ridiculous Valley eating fish and chips in the orchard on a Friday night. “Pass the vinegar,” he moaned. When no-one did, he snapped out of his dream and took command of the situation. “Quickly, Else! Get that piano on board! – I’d help but I don’t have any arms!” said Ergo. Elsie and the elf tried hard, but it was taking rather a long time. They struggled with the ramp. Eventually, they had the piano balanced on the sill 61