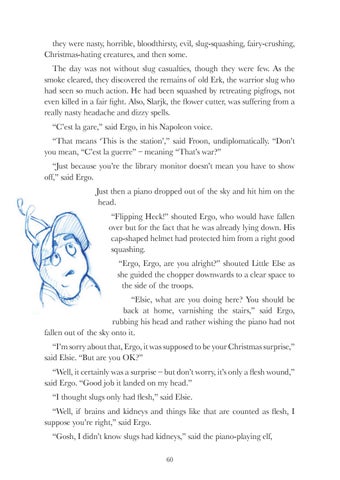 they were nasty, horrible, bloodthirsty, evil, slug-squashing, fairy-crushing, Christmas-hating creatures, and then some. The day was not without slug casualties, though they were few. As the smoke cleared, they discovered the remains of old Erk, the warrior slug who had seen so much action. He had been squashed by retreating pigfrogs, not even killed in a fair fight. Also, Slarjk, the flower cutter, was suffering from a really nasty headache and dizzy spells. “C’est la gare,” said Ergo, in his Napoleon voice. “That means ‘This is the station’,” said Froon, undiplomatically. “Don’t you mean, “C’est la guerre” – meaning “That’s war?” “Just because you’re the library monitor doesn’t mean you have to show off,” said Ergo. Just then a piano dropped out of the sky and hit him on the head. “Flipping Heck!” shouted Ergo, who would have fallen over but for the fact that he was already lying down. His cap-shaped helmet had protected him from a right good squashing. “Ergo, Ergo, are you alright?” shouted Little Else as she guided the chopper downwards to a clear space to the side of the troops. “Elsie, what are you doing here? You should be back at home, varnishing the stairs,” said Ergo, rubbing his head and rather wishing the piano had not fallen out of the sky onto it. “I’m sorry about that, Ergo, it was supposed to be your Christmas surprise,” said Elsie. “But are you OK?” “Well, it certainly was a surprise – but don’t worry, it’s only a flesh wound,” said Ergo. “Good job it landed on my head.” “I thought slugs only had flesh,” said Elsie. “Well, if brains and kidneys and things like that are counted as flesh, I suppose you’re right,” said Ergo. “Gosh, I didn’t know slugs had kidneys,” said the piano-playing elf, 60