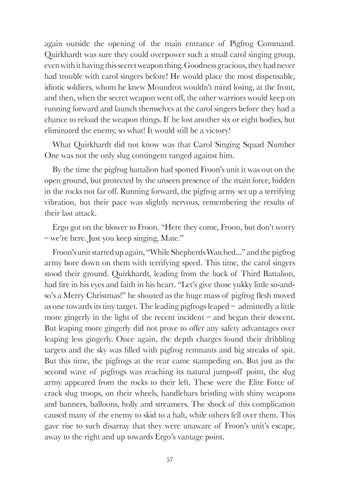 again outside the opening of the main entrance of Pigfrog Command. Quirkhardt was sure they could overpower such a small carol singing group, even with it having this secret weapon thing. Goodness gracious, they had never had trouble with carol singers before! He would place the most dispensable, idiotic soldiers, whom he knew Moundrot wouldn’t mind losing, at the front, and then, when the secret weapon went off, the other warriors would keep on running forward and launch themselves at the carol singers before they had a chance to reload the weapon things. If he lost another six or eight bodies, but eliminated the enemy, so what! It would still be a victory! What Quirkhardt did not know was that Carol Singing Squad Number One was not the only slug contingent ranged against him. By the time the pigfrog battalion had spotted Froon’s unit it was out on the open ground, but protected by the unseen presence of the main force, hidden in the rocks not far off. Running forward, the pigfrog army set up a terrifying vibration, but their pace was slightly nervous, remembering the results of their last attack. Ergo got on the blower to Froon. “Here they come, Froon, but don’t worry – we’re here. Just you keep singing, Mate.” Froon’s unit started up again, “While Shepherds Watched...” and the pigfrog army bore down on them with terrifying speed. This time, the carol singers stood their ground. Quirkhardt, leading from the back of Third Battalion, had fire in his eyes and faith in his heart. “Let’s give those yukky little so-andso’s a Merry Christmas!” he shouted as the huge mass of pigfrog flesh moved as one towards its tiny target. The leading pigfrogs leaped – admittedly a little more gingerly in the light of the recent incident – and began their descent. But leaping more gingerly did not prove to offer any safety advantages over leaping less gingerly. Once again, the depth charges found their dribbling targets and the sky was filled with pigfrog remnants and big streaks of spit. But this time, the pigfrogs at the rear came stampeding on. But just as the second wave of pigfrogs was reaching its natural jump-off point, the slug army appeared from the rocks to their left. These were the Elite Force of crack slug troops, on their wheels, handlebars bristling with shiny weapons and banners, balloons, holly and streamers. The shock of this complication caused many of the enemy to skid to a halt, while others fell over them. This gave rise to such disarray that they were unaware of Froon’s unit’s escape, away to the right and up towards Ergo’s vantage point. 57