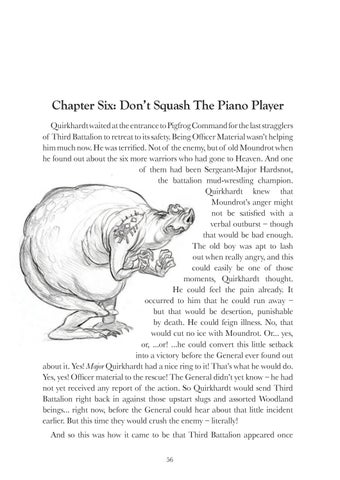 Chapter Six: Don’t Squash The Piano Player Quirkhardt waited at the entrance to Pigfrog Command for the last stragglers of Third Battalion to retreat to its safety. Being Officer Material wasn’t helping him much now. He was terrified. Not of the enemy, but of old Moundrot when he found out about the six more warriors who had gone to Heaven. And one of them had been Sergeant-Major Hardsnot, the battalion mud-wrestling champion. Quirkhardt knew that Moundrot’s anger might not be satisfied with a verbal outburst – though that would be bad enough. The old boy was apt to lash out when really angry, and this could easily be one of those moments, Quirkhardt thought. He could feel the pain already. It occurred to him that he could run away – but that would be desertion, punishable by death. He could feign illness. No, that would cut no ice with Moundrot. Or... yes, or, ...or! ...he could convert this little setback into a victory before the General ever found out about it. Yes! Major Quirkhardt had a nice ring to it! That’s what he would do. Yes, yes! Officer material to the rescue! The General didn’t yet know – he had not yet received any report of the action. So Quirkhardt would send Third Battalion right back in against those upstart slugs and assorted Woodland beings... right now, before the General could hear about that little incident earlier. But this time they would crush the enemy – literally! And so this was how it came to be that Third Battalion appeared once 56