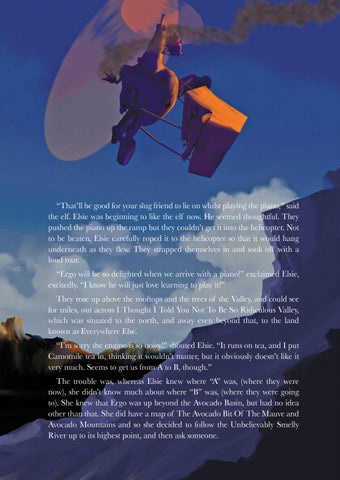 “That’ll be good for your slug friend to lie on whilst playing the piano,” said the elf. Elsie was beginning to like the elf now. He seemed thoughtful. They pushed the piano up the ramp but they couldn’t get it into the helicopter. Not to be beaten, Elsie carefully roped it to the helicopter so that it would hang underneath as they flew. They strapped themselves in and took off with a loud roar. “Ergo will be so delighted when we arrive with a piano!” exclaimed Elsie, excitedly. “I know he will just love learning to play it!” They rose up above the rooftops and the trees of the Valley, and could see for miles, out across I Thought I Told You Not To Be So Ridiculous Valley, which was situated to the north, and away even beyond that, to the land known as Everywhere Else. “I’m sorry the engine is so noisy!” shouted Elsie. “It runs on tea, and I put Camomile tea in, thinking it wouldn’t matter, but it obviously doesn’t like it very much. Seems to get us from A to B, though.” The trouble was, whereas Elsie knew where “A” was, (where they were now), she didn’t know much about where “B” was, (where they were going to). She knew that Ergo was up beyond the Avocado Basin, but had no idea other than that. She did have a map of The Avocado Bit Of The Mauve and Avocado Mountains and so she decided to follow the Unbelievably Smelly River up to its highest point, and then ask someone. 55