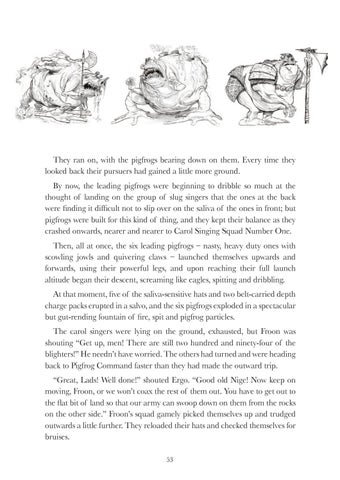 They ran on, with the pigfrogs bearing down on them. Every time they looked back their pursuers had gained a little more ground. By now, the leading pigfrogs were beginning to dribble so much at the thought of landing on the group of slug singers that the ones at the back were finding it difficult not to slip over on the saliva of the ones in front; but pigfrogs were built for this kind of thing, and they kept their balance as they crashed onwards, nearer and nearer to Carol Singing Squad Number One. Then, all at once, the six leading pigfrogs – nasty, heavy duty ones with scowling jowls and quivering claws – launched themselves upwards and forwards, using their powerful legs, and upon reaching their full launch altitude began their descent, screaming like eagles, spitting and dribbling. At that moment, five of the saliva-sensitive hats and two belt-carried depth charge packs erupted in a salvo, and the six pigfrogs exploded in a spectacular but gut-rending fountain of fire, spit and pigfrog particles. The carol singers were lying on the ground, exhausted, but Froon was shouting “Get up, men! There are still two hundred and ninety-four of the blighters!” He needn’t have worried. The others had turned and were heading back to Pigfrog Command faster than they had made the outward trip. “Great, Lads! Well done!” shouted Ergo. “Good old Nige! Now keep on moving, Froon, or we won’t coax the rest of them out. You have to get out to the flat bit of land so that our army can swoop down on them from the rocks on the other side.” Froon’s squad gamely picked themselves up and trudged outwards a little further. They reloaded their hats and checked themselves for bruises. 53