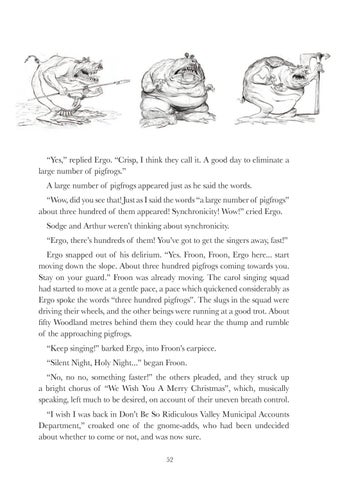 “Yes,” replied Ergo. “Crisp, I think they call it. A good day to eliminate a large number of pigfrogs.” A large number of pigfrogs appeared just as he said the words. “Wow, did you see that! Just as I said the words “a large number of pigfrogs” about three hundred of them appeared! Synchronicity! Wow!” cried Ergo. Sodge and Arthur weren’t thinking about synchronicity. “Ergo, there’s hundreds of them! You’ve got to get the singers away, fast!” Ergo snapped out of his delirium. “Yes. Froon, Froon, Ergo here... start moving down the slope. About three hundred pigfrogs coming towards you. Stay on your guard.” Froon was already moving. The carol singing squad had started to move at a gentle pace, a pace which quickened considerably as Ergo spoke the words “three hundred pigfrogs”. The slugs in the squad were driving their wheels, and the other beings were running at a good trot. About fifty Woodland metres behind them they could hear the thump and rumble of the approaching pigfrogs. “Keep singing!” barked Ergo, into Froon’s earpiece. “Silent Night, Holy Night...” began Froon. “No, no no, something faster!” the others pleaded, and they struck up a bright chorus of “We Wish You A Merry Christmas”, which, musically speaking, left much to be desired, on account of their uneven breath control. “I wish I was back in Don’t Be So Ridiculous Valley Municipal Accounts Department,” croaked one of the gnome-adds, who had been undecided about whether to come or not, and was now sure. 52