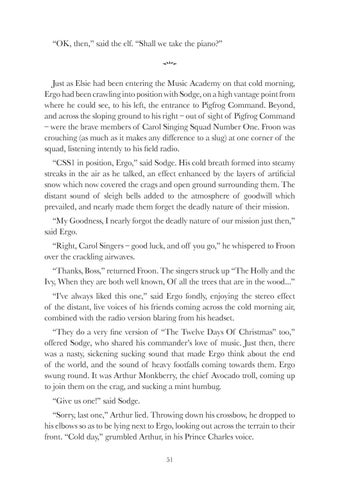 “OK, then,” said the elf. “Shall we take the piano?” 5 Just as Elsie had been entering the Music Academy on that cold morning, Ergo had been crawling into position with Sodge, on a high vantage point from where he could see, to his left, the entrance to Pigfrog Command. Beyond, and across the sloping ground to his right – out of sight of Pigfrog Command – were the brave members of Carol Singing Squad Number One. Froon was crouching (as much as it makes any difference to a slug) at one corner of the squad, listening intently to his field radio. “CSS1 in position, Ergo,” said Sodge. His cold breath formed into steamy streaks in the air as he talked, an effect enhanced by the layers of artificial snow which now covered the crags and open ground surrounding them. The distant sound of sleigh bells added to the atmosphere of goodwill which prevailed, and nearly made them forget the deadly nature of their mission. “My Goodness, I nearly forgot the deadly nature of our mission just then,” said Ergo. “Right, Carol Singers – good luck, and off you go,” he whispered to Froon over the crackling airwaves. “Thanks, Boss,” returned Froon. The singers struck up “The Holly and the Ivy, When they are both well known, Of all the trees that are in the wood...” “I’ve always liked this one,” said Ergo fondly, enjoying the stereo effect of the distant, live voices of his friends coming across the cold morning air, combined with the radio version blaring from his headset. “They do a very fine version of “The Twelve Days Of Christmas” too,” offered Sodge, who shared his commander’s love of music. Just then, there was a nasty, sickening sucking sound that made Ergo think about the end of the world, and the sound of heavy footfalls coming towards them. Ergo swung round. It was Arthur Monkberry, the chief Avocado troll, coming up to join them on the crag, and sucking a mint humbug. “Give us one!” said Sodge. “Sorry, last one,” Arthur lied. Throwing down his crossbow, he dropped to his elbows so as to be lying next to Ergo, looking out across the terrain to their front. “Cold day,” grumbled Arthur, in his Prince Charles voice. 51