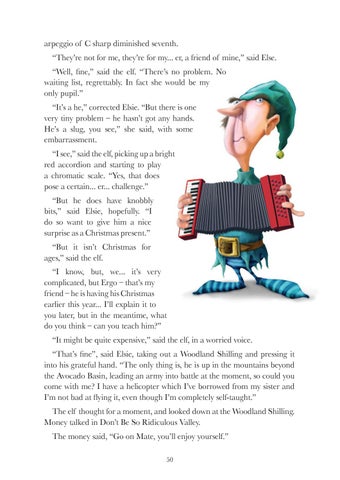 arpeggio of C sharp diminished seventh. “They’re not for me, they’re for my... er, a friend of mine,” said Else. “Well, fine,” said the elf. “There’s no problem. No waiting list, regrettably. In fact she would be my only pupil.” “It’s a he,” corrected Elsie. “But there is one very tiny problem – he hasn’t got any hands. He’s a slug, you see,” she said, with some embarrassment. “I see,” said the elf, picking up a bright red accordion and starting to play a chromatic scale. “Yes, that does pose a certain... er... challenge.” “But he does have knobbly bits,” said Elsie, hopefully. “I do so want to give him a nice surprise as a Christmas present.” “But it isn’t Christmas for ages,” said the elf. “I know, but, we... it’s very complicated, but Ergo – that’s my friend – he is having his Christmas earlier this year... I’ll explain it to you later, but in the meantime, what do you think – can you teach him?” “It might be quite expensive,” said the elf, in a worried voice. “That’s fine”, said Elsie, taking out a Woodland Shilling and pressing it into his grateful hand. “The only thing is, he is up in the mountains beyond the Avocado Basin, leading an army into battle at the moment, so could you come with me? I have a helicopter which I’ve borrowed from my sister and I’m not bad at flying it, even though I’m completely self-taught.” The elf thought for a moment, and looked down at the Woodland Shilling. Money talked in Don’t Be So Ridiculous Valley. The money said, “Go on Mate, you’ll enjoy yourself.” 50