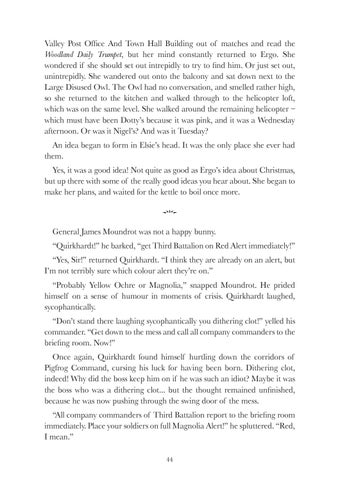 Valley Post Office And Town Hall Building out of matches and read the Woodland Daily Trumpet, but her mind constantly returned to Ergo. She wondered if she should set out intrepidly to try to find him. Or just set out, unintrepidly. She wandered out onto the balcony and sat down next to the Large Disused Owl. The Owl had no conversation, and smelled rather high, so she returned to the kitchen and walked through to the helicopter loft, which was on the same level. She walked around the remaining helicopter – which must have been Dotty’s because it was pink, and it was a Wednesday afternoon. Or was it Nigel’s? And was it Tuesday? An idea began to form in Elsie’s head. It was the only place she ever had them. Yes, it was a good idea! Not quite as good as Ergo’s idea about Christmas, but up there with some of the really good ideas you hear about. She began to make her plans, and waited for the kettle to boil once more. 5 General James Moundrot was not a happy bunny. “Quirkhardt!” he barked, “get Third Battalion on Red Alert immediately!” “Yes, Sir!” returned Quirkhardt. “I think they are already on an alert, but I’m not terribly sure which colour alert they’re on.” “Probably Yellow Ochre or Magnolia,” snapped Moundrot. He prided himself on a sense of humour in moments of crisis. Quirkhardt laughed, sycophantically. “Don’t stand there laughing sycophantically you dithering clot!” yelled his commander. “Get down to the mess and call all company commanders to the briefing room. Now!” Once again, Quirkhardt found himself hurtling down the corridors of Pigfrog Command, cursing his luck for having been born. Dithering clot, indeed! Why did the boss keep him on if he was such an idiot? Maybe it was the boss who was a dithering clot... but the thought remained unfinished, because he was now pushing through the swing door of the mess. “All company commanders of Third Battalion report to the briefing room immediately. Place your soldiers on full Magnolia Alert!” he spluttered. “Red, I mean.” 44