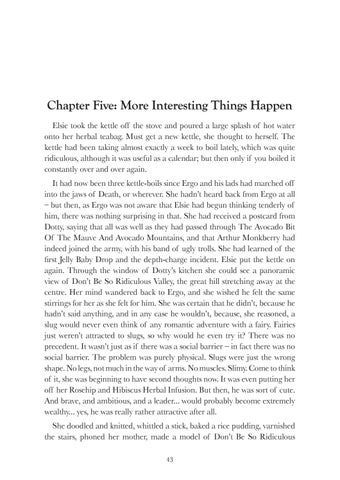 Chapter Five: More Interesting Things Happen Elsie took the kettle off the stove and poured a large splash of hot water onto her herbal teabag. Must get a new kettle, she thought to herself. The kettle had been taking almost exactly a week to boil lately, which was quite ridiculous, although it was useful as a calendar; but then only if you boiled it constantly over and over again. It had now been three kettle-boils since Ergo and his lads had marched off into the jaws of Death, or wherever. She hadn’t heard back from Ergo at all – but then, as Ergo was not aware that Elsie had begun thinking tenderly of him, there was nothing surprising in that. She had received a postcard from Dotty, saying that all was well as they had passed through The Avocado Bit Of The Mauve And Avocado Mountains, and that Arthur Monkberry had indeed joined the army, with his band of ugly trolls. She had learned of the first Jelly Baby Drop and the depth-charge incident. Elsie put the kettle on again. Through the window of Dotty’s kitchen she could see a panoramic view of Don’t Be So Ridiculous Valley, the great hill stretching away at the centre. Her mind wandered back to Ergo, and she wished he felt the same stirrings for her as she felt for him. She was certain that he didn’t, because he hadn’t said anything, and in any case he wouldn’t, because, she reasoned, a slug would never even think of any romantic adventure with a fairy. Fairies just weren’t attracted to slugs, so why would he even try it? There was no precedent. It wasn’t just as if there was a social barrier – in fact there was no social barrier. The problem was purely physical. Slugs were just the wrong shape. No legs, not much in the way of arms. No muscles. Slimy. Come to think of it, she was beginning to have second thoughts now. It was even putting her off her Rosehip and Hibiscus Herbal Infusion. But then, he was sort of cute. And brave, and ambitious, and a leader... would probably become extremely wealthy... yes, he was really rather attractive after all. She doodled and knitted, whittled a stick, baked a rice pudding, varnished the stairs, phoned her mother, made a model of Don’t Be So Ridiculous 43