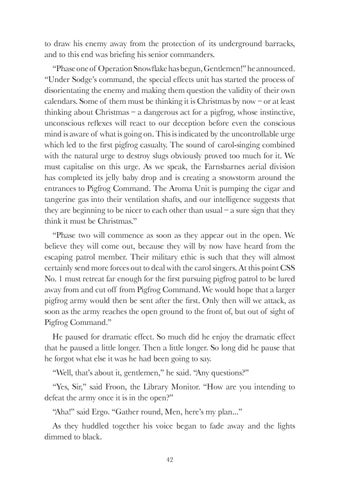 to draw his enemy away from the protection of its underground barracks, and to this end was briefing his senior commanders. “Phase one of Operation Snowflake has begun, Gentlemen!” he announced. “Under Sodge’s command, the special effects unit has started the process of disorientating the enemy and making them question the validity of their own calendars. Some of them must be thinking it is Christmas by now – or at least thinking about Christmas – a dangerous act for a pigfrog, whose instinctive, unconscious reflexes will react to our deception before even the conscious mind is aware of what is going on. This is indicated by the uncontrollable urge which led to the first pigfrog casualty. The sound of carol-singing combined with the natural urge to destroy slugs obviously proved too much for it. We must capitalise on this urge. As we speak, the Farnsbarnes aerial division has completed its jelly baby drop and is creating a snowstorm around the entrances to Pigfrog Command. The Aroma Unit is pumping the cigar and tangerine gas into their ventilation shafts, and our intelligence suggests that they are beginning to be nicer to each other than usual – a sure sign that they think it must be Christmas.” “Phase two will commence as soon as they appear out in the open. We believe they will come out, because they will by now have heard from the escaping patrol member. Their military ethic is such that they will almost certainly send more forces out to deal with the carol singers. At this point CSS No. 1 must retreat far enough for the first pursuing pigfrog patrol to be lured away from and cut off from Pigfrog Command. We would hope that a larger pigfrog army would then be sent after the first. Only then will we attack, as soon as the army reaches the open ground to the front of, but out of sight of Pigfrog Command.” He paused for dramatic effect. So much did he enjoy the dramatic effect that he paused a little longer. Then a little longer. So long did he pause that he forgot what else it was he had been going to say. “Well, that’s about it, gentlemen,” he said. “Any questions?” “Yes, Sir,” said Froon, the Library Monitor. “How are you intending to defeat the army once it is in the open?” “Aha!” said Ergo. “Gather round, Men, here’s my plan...” As they huddled together his voice began to fade away and the lights dimmed to black. 42