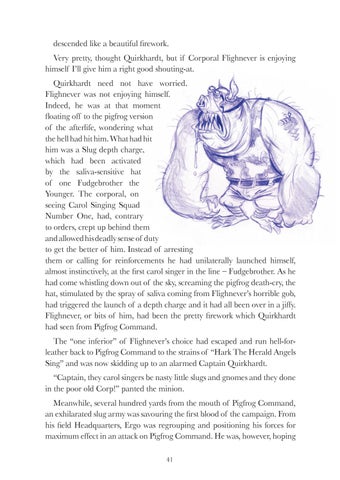 descended like a beautiful firework. Very pretty, thought Quirkhardt, but if Corporal Flighnever is enjoying himself I’ll give him a right good shouting-at. Quirkhardt need not have worried. Flighnever was not enjoying himself. Indeed, he was at that moment floating off to the pigfrog version of the afterlife, wondering what the hell had hit him. What had hit him was a Slug depth charge, which had been activated by the saliva-sensitive hat of one Fudgebrother the Younger. The corporal, on seeing Carol Singing Squad Number One, had, contrary to orders, crept up behind them and allowed his deadly sense of duty to get the better of him. Instead of arresting them or calling for reinforcements he had unilaterally launched himself, almost instinctively, at the first carol singer in the line – Fudgebrother. As he had come whistling down out of the sky, screaming the pigfrog death-cry, the hat, stimulated by the spray of saliva coming from Flighnever’s horrible gob, had triggered the launch of a depth charge and it had all been over in a jiffy. Flighnever, or bits of him, had been the pretty firework which Quirkhardt had seen from Pigfrog Command. The “one inferior” of Flighnever’s choice had escaped and run hell-forleather back to Pigfrog Command to the strains of “Hark The Herald Angels Sing” and was now skidding up to an alarmed Captain Quirkhardt. “Captain, they carol singers be nasty little slugs and gnomes and they done in the poor old Corp!” panted the minion. Meanwhile, several hundred yards from the mouth of Pigfrog Command, an exhilarated slug army was savouring the first blood of the campaign. From his field Headquarters, Ergo was regrouping and positioning his forces for maximum effect in an attack on Pigfrog Command. He was, however, hoping 41