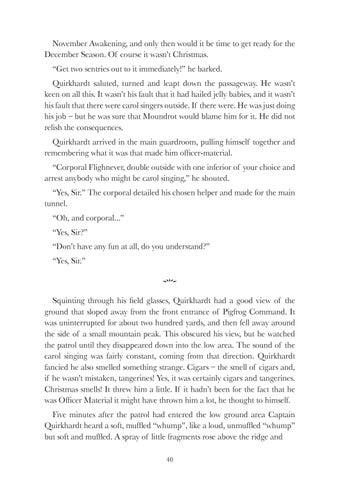 November Awakening, and only then would it be time to get ready for the December Season. Of course it wasn’t Christmas. “Get two sentries out to it immediately!” he barked. Quirkhardt saluted, turned and leapt down the passageway. He wasn’t keen on all this. It wasn’t his fault that it had hailed jelly babies, and it wasn’t his fault that there were carol singers outside. If there were. He was just doing his job – but he was sure that Moundrot would blame him for it. He did not relish the consequences. Quirkhardt arrived in the main guardroom, pulling himself together and remembering what it was that made him officer-material. “Corporal Flighnever, double outside with one inferior of your choice and arrest anybody who might be carol singing,” he shouted. “Yes, Sir.” The corporal detailed his chosen helper and made for the main tunnel. “Oh, and corporal...” “Yes, Sir?” “Don’t have any fun at all, do you understand?” “Yes, Sir.” 5 Squinting through his field glasses, Quirkhardt had a good view of the ground that sloped away from the front entrance of Pigfrog Command. It was uninterrupted for about two hundred yards, and then fell away around the side of a small mountain peak. This obscured his view, but he watched the patrol until they disappeared down into the low area. The sound of the carol singing was fairly constant, coming from that direction. Quirkhardt fancied he also smelled something strange. Cigars – the smell of cigars and, if he wasn’t mistaken, tangerines! Yes, it was certainly cigars and tangerines. Christmas smells! It threw him a little. If it hadn’t been for the fact that he was Officer Material it might have thrown him a lot, he thought to himself. Five minutes after the patrol had entered the low ground area Captain Quirkhardt heard a soft, muffled “whump”, like a loud, unmuffled “whump” but soft and muffled. A spray of little fragments rose above the ridge and 40