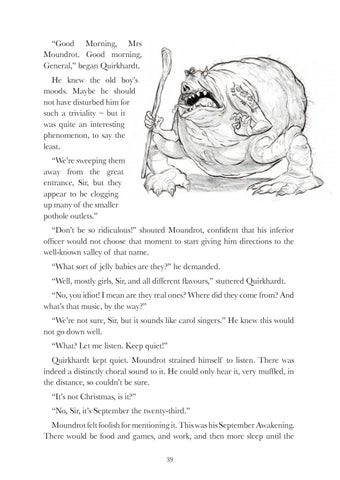 “Good Morning, Mrs Moundrot. Good morning, General,” began Quirkhardt. He knew the old boy’s moods. Maybe he should not have disturbed him for such a triviality – but it was quite an interesting phenomenon, to say the least. “We’re sweeping them away from the great entrance, Sir, but they appear to be clogging up many of the smaller pothole outlets.” “Don’t be so ridiculous!” shouted Moundrot, confident that his inferior officer would not choose that moment to start giving him directions to the well-known valley of that name. “What sort of jelly babies are they?” he demanded. “Well, mostly girls, Sir, and all different flavours,” stuttered Quirkhardt. “No, you idiot! I mean are they real ones? Where did they come from? And what’s that music, by the way?” “We’re not sure, Sir, but it sounds like carol singers.” He knew this would not go down well. “What? Let me listen. Keep quiet!” Quirkhardt kept quiet. Moundrot strained himself to listen. There was indeed a distinctly choral sound to it. He could only hear it, very muffled, in the distance, so couldn’t be sure. “It’s not Christmas, is it?” “No, Sir, it’s September the twenty-third.” Moundrot felt foolish for mentioning it. This was his September Awakening. There would be food and games, and work, and then more sleep until the 39