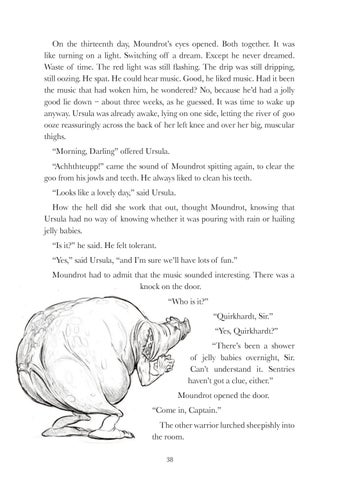 On the thirteenth day, Moundrot’s eyes opened. Both together. It was like turning on a light. Switching off a dream. Except he never dreamed. Waste of time. The red light was still flashing. The drip was still dripping, still oozing. He spat. He could hear music. Good, he liked music. Had it been the music that had woken him, he wondered? No, because he’d had a jolly good lie down – about three weeks, as he guessed. It was time to wake up anyway. Ursula was already awake, lying on one side, letting the river of goo ooze reassuringly across the back of her left knee and over her big, muscular thighs. “Morning, Darling” offered Ursula. “Achhthteupp!” came the sound of Moundrot spitting again, to clear the goo from his jowls and teeth. He always liked to clean his teeth. “Looks like a lovely day,” said Ursula. How the hell did she work that out, thought Moundrot, knowing that Ursula had no way of knowing whether it was pouring with rain or hailing jelly babies. “Is it?” he said. He felt tolerant. “Yes,” said Ursula, “and I’m sure we’ll have lots of fun.” Moundrot had to admit that the music sounded interesting. There was a knock on the door. “Who is it?” “Quirkhardt, Sir.” “Yes, Quirkhardt?” “There’s been a shower of jelly babies overnight, Sir. Can’t understand it. Sentries haven’t got a clue, either.” Moundrot opened the door. “Come in, Captain.” The other warrior lurched sheepishly into the room. 38