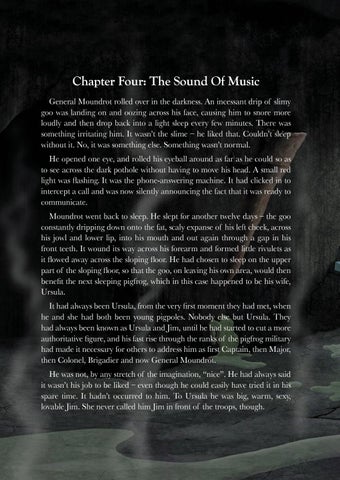 Chapter Four: The Sound Of Music General Moundrot rolled over in the darkness. An incessant drip of slimy goo was landing on and oozing across his face, causing him to snore more loudly and then drop back into a light sleep every few minutes. There was something irritating him. It wasn’t the slime – he liked that. Couldn’t sleep without it. No, it was something else. Something wasn’t normal. He opened one eye, and rolled his eyeball around as far as he could so as to see across the dark pothole without having to move his head. A small red light was flashing. It was the phone-answering machine. It had clicked in to intercept a call and was now silently announcing the fact that it was ready to communicate. Moundrot went back to sleep. He slept for another twelve days – the goo constantly dripping down onto the fat, scaly expanse of his left cheek, across his jowl and lower lip, into his mouth and out again through a gap in his front teeth. It wound its way across his forearm and formed little rivulets as it flowed away across the sloping floor. He had chosen to sleep on the upper part of the sloping floor, so that the goo, on leaving his own area, would then benefit the next sleeping pigfrog, which in this case happened to be his wife, Ursula. It had always been Ursula, from the very first moment they had met, when he and she had both been young pigpoles. Nobody else but Ursula. They had always been known as Ursula and Jim, until he had started to cut a more authoritative figure, and his fast rise through the ranks of the pigfrog military had made it necessary for others to address him as first Captain, then Major, then Colonel, Brigadier and now General Moundrot. He was not, by any stretch of the imagination, “nice”. He had always said it wasn’t his job to be liked – even though he could easily have tried it in his spare time. It hadn’t occurred to him. To Ursula he was big, warm, sexy, lovable Jim. She never called him Jim in front of the troops, though.