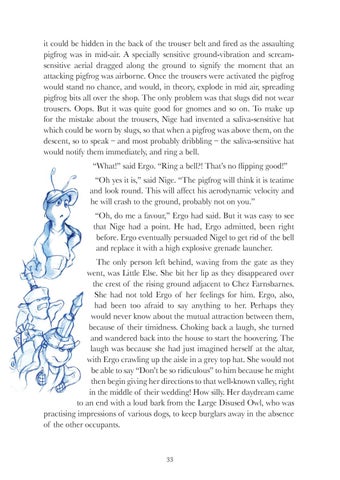 it could be hidden in the back of the trouser belt and fired as the assaulting pigfrog was in mid-air. A specially sensitive ground-vibration and screamsensitive aerial dragged along the ground to signify the moment that an attacking pigfrog was airborne. Once the trousers were activated the pigfrog would stand no chance, and would, in theory, explode in mid air, spreading pigfrog bits all over the shop. The only problem was that slugs did not wear trousers. Oops. But it was quite good for gnomes and so on. To make up for the mistake about the trousers, Nige had invented a saliva-sensitive hat which could be worn by slugs, so that when a pigfrog was above them, on the descent, so to speak – and most probably dribbling – the saliva-sensitive hat would notify them immediately, and ring a bell. “What!” said Ergo. “Ring a bell?! That’s no flipping good!” “Oh yes it is,” said Nige. “The pigfrog will think it is teatime and look round. This will affect his aerodynamic velocity and he will crash to the ground, probably not on you.” “Oh, do me a favour,” Ergo had said. But it was easy to see that Nige had a point. He had, Ergo admitted, been right before. Ergo eventually persuaded Nigel to get rid of the bell and replace it with a high explosive grenade launcher. The only person left behind, waving from the gate as they went, was Little Else. She bit her lip as they disappeared over the crest of the rising ground adjacent to Chez Farnsbarnes. She had not told Ergo of her feelings for him. Ergo, also, had been too afraid to say anything to her. Perhaps they would never know about the mutual attraction between them, because of their timidness. Choking back a laugh, she turned and wandered back into the house to start the hoovering. The laugh was because she had just imagined herself at the altar, with Ergo crawling up the aisle in a grey top hat. She would not be able to say “Don’t be so ridiculous” to him because he might then begin giving her directions to that well-known valley, right in the middle of their wedding! How silly. Her daydream came to an end with a loud bark from the Large Disused Owl, who was practising impressions of various dogs, to keep burglars away in the absence of the other occupants.