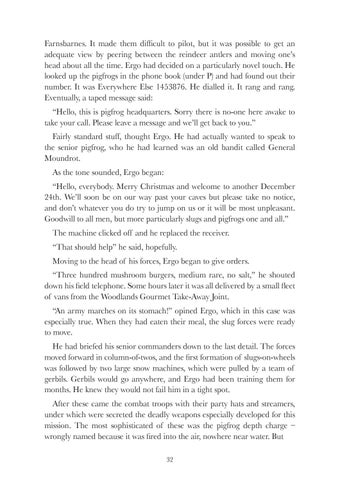 Farnsbarnes. It made them difficult to pilot, but it was possible to get an adequate view by peering between the reindeer antlers and moving one’s head about all the time. Ergo had decided on a particularly novel touch. He looked up the pigfrogs in the phone book (under P) and had found out their number. It was Everywhere Else 1453876. He dialled it. It rang and rang. Eventually, a taped message said: “Hello, this is pigfrog headquarters. Sorry there is no-one here awake to take your call. Please leave a message and we’ll get back to you.” Fairly standard stuff, thought Ergo. He had actually wanted to speak to the senior pigfrog, who he had learned was an old bandit called General Moundrot. As the tone sounded, Ergo began: “Hello, everybody. Merry Christmas and welcome to another December 24th. We’ll soon be on our way past your caves but please take no notice, and don’t whatever you do try to jump on us or it will be most unpleasant. Goodwill to all men, but more particularly slugs and pigfrogs one and all.” The machine clicked off and he replaced the receiver. “That should help” he said, hopefully. Moving to the head of his forces, Ergo began to give orders. “Three hundred mushroom burgers, medium rare, no salt,” he shouted down his field telephone. Some hours later it was all delivered by a small fleet of vans from the Woodlands Gourmet Take-Away Joint. “An army marches on its stomach!” opined Ergo, which in this case was especially true. When they had eaten their meal, the slug forces were ready to move. He had briefed his senior commanders down to the last detail. The forces moved forward in column-of-twos, and the first formation of slugs-on-wheels was followed by two large snow machines, which were pulled by a team of gerbils. Gerbils would go anywhere, and Ergo had been training them for months. He knew they would not fail him in a tight spot. After these came the combat troops with their party hats and streamers, under which were secreted the deadly weapons especially developed for this mission. The most sophisticated of these was the pigfrog depth charge – wrongly named because it was fired into the air, nowhere near water. But 32