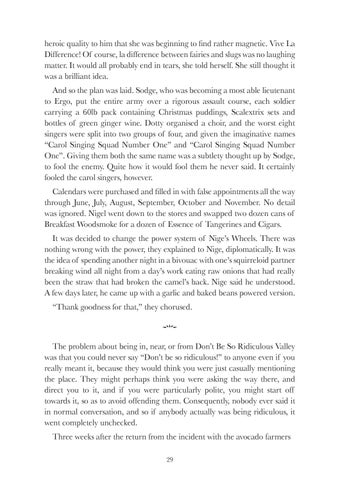 heroic quality to him that she was beginning to find rather magnetic. Vive La Difference! Of course, la difference between fairies and slugs was no laughing matter. It would all probably end in tears, she told herself. She still thought it was a brilliant idea. And so the plan was laid. Sodge, who was becoming a most able lieutenant to Ergo, put the entire army over a rigorous assault course, each soldier carrying a 60lb pack containing Christmas puddings, Scalextrix sets and bottles of green ginger wine. Dotty organised a choir, and the worst eight singers were split into two groups of four, and given the imaginative names “Carol Singing Squad Number One” and “Carol Singing Squad Number One”. Giving them both the same name was a subtlety thought up by Sodge, to fool the enemy. Quite how it would fool them he never said. It certainly fooled the carol singers, however. Calendars were purchased and filled in with false appointments all the way through June, July, August, September, October and November. No detail was ignored. Nigel went down to the stores and swapped two dozen cans of Breakfast Woodsmoke for a dozen of Essence of Tangerines and Cigars. It was decided to change the power system of Nige’s Wheels. There was nothing wrong with the power, they explained to Nige, diplomatically. It was the idea of spending another night in a bivouac with one’s squirreloid partner breaking wind all night from a day’s work eating raw onions that had really been the straw that had broken the camel’s back. Nige said he understood. A few days later, he came up with a garlic and baked beans powered version. “Thank goodness for that,” they chorused. 5 The problem about being in, near, or from Don’t Be So Ridiculous Valley was that you could never say “Don’t be so ridiculous!” to anyone even if you really meant it, because they would think you were just casually mentioning the place. They might perhaps think you were asking the way there, and direct you to it, and if you were particularly polite, you might start off towards it, so as to avoid offending them. Consequently, nobody ever said it in normal conversation, and so if anybody actually was being ridiculous, it went completely unchecked. Three weeks after the return from the incident with the avocado farmers 29