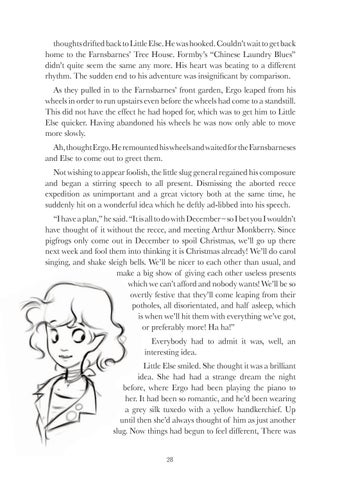 thoughts drifted back to Little Else. He was hooked. Couldn’t wait to get back home to the Farnsbarnes’ Tree House. Formby’s “Chinese Laundry Blues” didn’t quite seem the same any more. His heart was beating to a different rhythm. The sudden end to his adventure was insignificant by comparison. As they pulled in to the Farnsbarnes’ front garden, Ergo leaped from his wheels in order to run upstairs even before the wheels had come to a standstill. This did not have the effect he had hoped for, which was to get him to Little Else quicker. Having abandoned his wheels he was now only able to move more slowly. Ah, thought Ergo. He remounted his wheels and waited for the Farnsbarneses and Else to come out to greet them. Not wishing to appear foolish, the little slug general regained his composure and began a stirring speech to all present. Dismissing the aborted recce expedition as unimportant and a great victory both at the same time, he suddenly hit on a wonderful idea which he deftly ad-libbed into his speech. “I have a plan,” he said. “It is all to do with December – so I bet you I wouldn’t have thought of it without the recce, and meeting Arthur Monkberry. Since pigfrogs only come out in December to spoil Christmas, we’ll go up there next week and fool them into thinking it is Christmas already! We’ll do carol singing, and shake sleigh bells. We’ll be nicer to each other than usual, and make a big show of giving each other useless presents which we can’t afford and nobody wants! We’ll be so overtly festive that they’ll come leaping from their potholes, all disorientated, and half asleep, which is when we’ll hit them with everything we’ve got, or preferably more! Ha ha!” Everybody had to admit it was, well, an interesting idea. Little Else smiled. She thought it was a brilliant idea. She had had a strange dream the night before, where Ergo had been playing the piano to her. It had been so romantic, and he’d been wearing a grey silk tuxedo with a yellow handkerchief. Up until then she’d always thought of him as just another slug. Now things had begun to feel different, There was 28