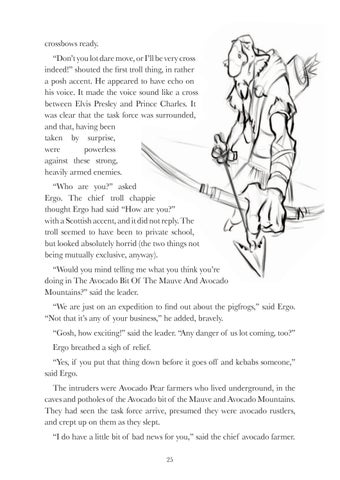 crossbows ready. “Don’t you lot dare move, or I’ll be very cross indeed!” shouted the first troll thing, in rather a posh accent. He appeared to have echo on his voice. It made the voice sound like a cross between Elvis Presley and Prince Charles. It was clear that the task force was surrounded, and that, having been taken by surprise, were powerless against these strong, heavily armed enemies. “Who are you?” asked Ergo. The chief troll chappie thought Ergo had said “How are you?” with a Scottish accent, and it did not reply. The troll seemed to have been to private school, but looked absolutely horrid (the two things not being mutually exclusive, anyway). “Would you mind telling me what you think you’re doing in The Avocado Bit Of The Mauve And Avocado Mountains?” said the leader. “We are just on an expedition to find out about the pigfrogs,” said Ergo. “Not that it’s any of your business,” he added, bravely. “Gosh, how exciting!” said the leader. “Any danger of us lot coming, too?” Ergo breathed a sigh of relief. “Yes, if you put that thing down before it goes off and kebabs someone,” said Ergo. The intruders were Avocado Pear farmers who lived underground, in the caves and potholes of the Avocado bit of the Mauve and Avocado Mountains. They had seen the task force arrive, presumed they were avocado rustlers, and crept up on them as they slept. “I do have a little bit of bad news for you,” said the chief avocado farmer. 25