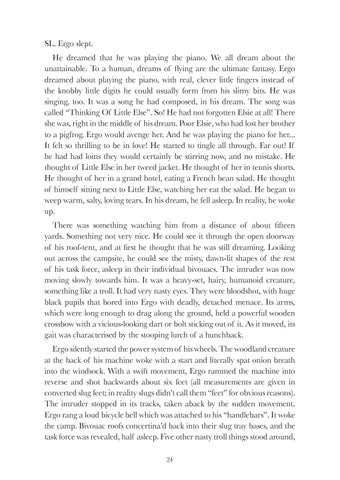 SL. Ergo slept. He dreamed that he was playing the piano. We all dream about the unattainable. To a human, dreams of flying are the ultimate fantasy. Ergo dreamed about playing the piano, with real, clever little fingers instead of the knobby little digits he could usually form from his slimy bits. He was singing, too. It was a song he had composed, in his dream. The song was called “Thinking Of Little Else”. So! He had not forgotten Elsie at all! There she was, right in the middle of his dream. Poor Elsie, who had lost her brother to a pigfrog. Ergo would avenge her. And he was playing the piano for her... It felt so thrilling to be in love! He started to tingle all through. Far out! If he had had loins they would certainly be stirring now, and no mistake. He thought of Little Else in her tweed jacket. He thought of her in tennis shorts. He thought of her in a grand hotel, eating a French bean salad. He thought of himself sitting next to Little Else, watching her eat the salad. He began to weep warm, salty, loving tears. In his dream, he fell asleep. In reality, he woke up. There was something watching him from a distance of about fifteen yards. Something not very nice. He could see it through the open doorway of his roof-tent, and at first he thought that he was still dreaming. Looking out across the campsite, he could see the misty, dawn-lit shapes of the rest of his task force, asleep in their individual bivouacs. The intruder was now moving slowly towards him. It was a heavy-set, hairy, humanoid creature, something like a troll. It had very nasty eyes. They were bloodshot, with huge black pupils that bored into Ergo with deadly, detached menace. Its arms, which were long enough to drag along the ground, held a powerful wooden crossbow with a vicious-looking dart or bolt sticking out of it. As it moved, its gait was characterised by the stooping lurch of a hunchback. Ergo silently started the power system of his wheels. The woodland creature at the back of his machine woke with a start and literally spat onion breath into the windsock. With a swift movement, Ergo rammed the machine into reverse and shot backwards about six feet (all measurements are given in converted slug feet; in reality slugs didn’t call them “feet” for obvious reasons). The intruder stopped in its tracks, taken aback by the sudden movement. Ergo rang a loud bicycle bell which was attached to his “handlebars”. It woke the camp. Bivouac roofs concertina’d back into their slug tray bases, and the task force was revealed, half asleep. Five other nasty troll things stood around, 24