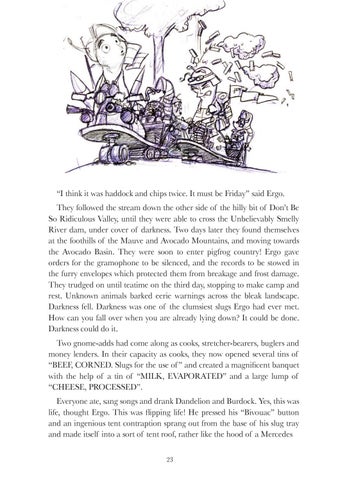 “I think it was haddock and chips twice. It must be Friday” said Ergo. They followed the stream down the other side of the hilly bit of Don’t Be So Ridiculous Valley, until they were able to cross the Unbelievably Smelly River dam, under cover of darkness. Two days later they found themselves at the foothills of the Mauve and Avocado Mountains, and moving towards the Avocado Basin. They were soon to enter pigfrog country! Ergo gave orders for the gramophone to be silenced, and the records to be stowed in the furry envelopes which protected them from breakage and frost damage. They trudged on until teatime on the third day, stopping to make camp and rest. Unknown animals barked eerie warnings across the bleak landscape. Darkness fell. Darkness was one of the clumsiest slugs Ergo had ever met. How can you fall over when you are already lying down? It could be done. Darkness could do it. Two gnome-adds had come along as cooks, stretcher-bearers, buglers and money lenders. In their capacity as cooks, they now opened several tins of “BEEF, CORNED. Slugs for the use of ” and created a magnificent banquet with the help of a tin of “MILK, EVAPORATED” and a large lump of “CHEESE, PROCESSED”. Everyone ate, sang songs and drank Dandelion and Burdock. Yes, this was life, thought Ergo. This was flipping life! He pressed his “Bivouac” button and an ingenious tent contraption sprang out from the base of his slug tray and made itself into a sort of tent roof, rather like the hood of a Mercedes 23