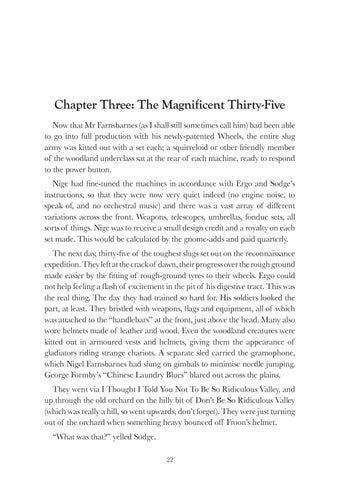 Chapter Three: The Magnificent Thirty-Five Now that Mr Farnsbarnes (as I shall still sometimes call him) had been able to go into full production with his newly-patented Wheels, the entire slug army was kitted out with a set each; a squirreloid or other friendly member of the woodland underclass sat at the rear of each machine, ready to respond to the power button. Nige had fine-tuned the machines in accordance with Ergo and Sodge’s instructions, so that they were now very quiet indeed (no engine noise, to speak of, and no orchestral music) and there was a vast array of different variations across the front. Weapons, telescopes, umbrellas, fondue sets, all sorts of things. Nige was to receive a small design credit and a royalty on each set made. This would be calculated by the gnome-adds and paid quarterly. The next day, thirty-five of the toughest slugs set out on the reconnaissance expedition. They left at the crack of dawn, their progress over the rough ground made easier by the fitting of rough-ground tyres to their wheels. Ergo could not help feeling a flash of excitement in the pit of his digestive tract. This was the real thing. The day they had trained so hard for. His soldiers looked the part, at least. They bristled with weapons, flags and equipment, all of which was attached to the “handlebars” at the front, just above the head. Many also wore helmets made of leather and wood. Even the woodland creatures were kitted out in armoured vests and helmets, giving them the appearance of gladiators riding strange chariots. A separate sled carried the gramophone, which Nigel Farnsbarnes had slung on gimbals to minimise needle jumping. George Formby’s “Chinese Laundry Blues” blared out across the plains. They went via I Thought I Told You Not To Be So Ridiculous Valley, and up through the old orchard on the hilly bit of Don’t Be So Ridiculous Valley (which was really a hill, so went upwards, don’t forget). They were just turning out of the orchard when something heavy bounced off Froon’s helmet. “What was that?” yelled Sodge. 22