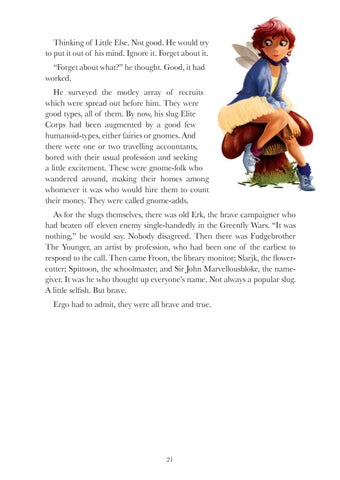 Thinking of Little Else. Not good. He would try to put it out of his mind. Ignore it. Forget about it. “Forget about what?” he thought. Good, it had worked. He surveyed the motley array of recruits which were spread out before him. They were good types, all of them. By now, his slug Elite Corps had been augmented by a good few humanoid-types, either fairies or gnomes. And there were one or two travelling accountants, bored with their usual profession and seeking a little excitement. These were gnome-folk who wandered around, making their homes among whomever it was who would hire them to count their money. They were called gnome-adds. As for the slugs themselves, there was old Erk, the brave campaigner who had beaten off eleven enemy single-handedly in the Greenfly Wars. “It was nothing,” he would say. Nobody disagreed. Then there was Fudgebrother The Younger, an artist by profession, who had been one of the earliest to respond to the call. Then came Froon, the library monitor; Slarjk, the flowercutter; Spittoon, the schoolmaster, and Sir John Marvellousbloke, the namegiver. It was he who thought up everyone’s name. Not always a popular slug. A little selfish. But brave. Ergo had to admit, they were all brave and true.