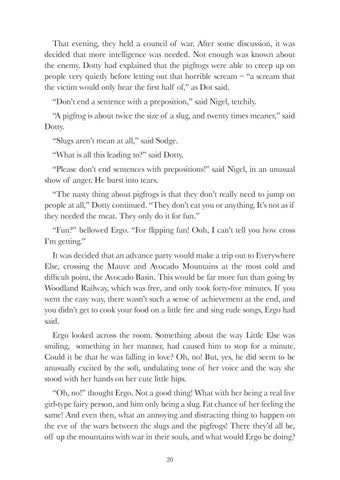 That evening, they held a council of war. After some discussion, it was decided that more intelligence was needed. Not enough was known about the enemy. Dotty had explained that the pigfrogs were able to creep up on people very quietly before letting out that horrible scream – “a scream that the victim would only hear the first half of,” as Dot said. “Don’t end a sentence with a preposition,” said Nigel, tetchily. “A pigfrog is about twice the size of a slug, and twenty times meaner,” said Dotty. “Slugs aren’t mean at all,” said Sodge. “What is all this leading to?” said Dotty. “Please don’t end sentences with prepositions!” said Nigel, in an unusual show of anger. He burst into tears. “The nasty thing about pigfrogs is that they don’t really need to jump on people at all,” Dotty continued. “They don’t eat you or anything. It’s not as if they needed the meat. They only do it for fun.” “Fun?” bellowed Ergo. “For flipping fun! Ooh, I can’t tell you how cross I’m getting.” It was decided that an advance party would make a trip out to Everywhere Else, crossing the Mauve and Avocado Mountains at the most cold and difficult point, the Avocado Basin. This would be far more fun than going by Woodland Railway, which was free, and only took forty-five minutes. If you went the easy way, there wasn’t such a sense of achievement at the end, and you didn’t get to cook your food on a little fire and sing rude songs, Ergo had said. Ergo looked across the room. Something about the way Little Else was smiling, something in her manner, had caused him to stop for a minute. Could it be that he was falling in love? Oh, no! But, yes, he did seem to be unusually excited by the soft, undulating tone of her voice and the way she stood with her hands on her cute little hips. “Oh, no!” thought Ergo. Not a good thing! What with her being a real live girl-type fairy person, and him only being a slug. Fat chance of her feeling the same! And even then, what an annoying and distracting thing to happen on the eve of the wars between the slugs and the pigfrogs! There they’d all be, off up the mountains with war in their souls, and what would Ergo be doing? 20