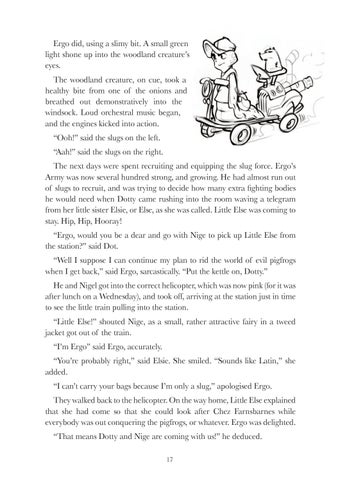 Ergo did, using a slimy bit. A small green light shone up into the woodland creature’s eyes. The woodland creature, on cue, took a healthy bite from one of the onions and breathed out demonstratively into the windsock. Loud orchestral music began, and the engines kicked into action. “Ooh!” said the slugs on the left. “Aah!” said the slugs on the right. The next days were spent recruiting and equipping the slug force. Ergo’s Army was now several hundred strong, and growing. He had almost run out of slugs to recruit, and was trying to decide how many extra fighting bodies he would need when Dotty came rushing into the room waving a telegram from her little sister Elsie, or Else, as she was called. Little Else was coming to stay. Hip, Hip, Hooray! “Ergo, would you be a dear and go with Nige to pick up Little Else from the station?” said Dot. “Well I suppose I can continue my plan to rid the world of evil pigfrogs when I get back,” said Ergo, sarcastically. “Put the kettle on, Dotty.” He and Nigel got into the correct helicopter, which was now pink (for it was after lunch on a Wednesday), and took off, arriving at the station just in time to see the little train pulling into the station. “Little Else!” shouted Nige, as a small, rather attractive fairy in a tweed jacket got out of the train. “I’m Ergo” said Ergo, accurately. “You’re probably right,” said Elsie. She smiled. “Sounds like Latin,” she added. “I can’t carry your bags because I’m only a slug,” apologised Ergo. They walked back to the helicopter. On the way home, Little Else explained that she had come so that she could look after Chez Farnsbarnes while everybody was out conquering the pigfrogs, or whatever. Ergo was delighted. “That means Dotty and Nige are coming with us!” he deduced. 17