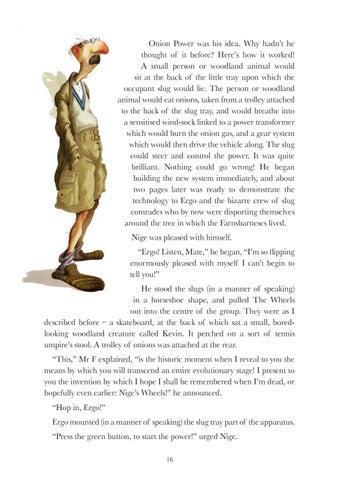 Onion Power was his idea. Why hadn’t he thought of it before? Here’s how it worked! A small person or woodland animal would sit at the back of the little tray upon which the occupant slug would lie. The person or woodland animal would eat onions, taken from a trolley attached to the back of the slug tray, and would breathe into a sensitised wind-sock linked to a power transformer which would burn the onion gas, and a gear system which would then drive the vehicle along. The slug could steer and control the power. It was quite brilliant. Nothing could go wrong! He began building the new system immediately, and about two pages later was ready to demonstrate the technology to Ergo and the bizarre crew of slug comrades who by now were disporting themselves around the tree in which the Farnsbarneses lived. Nige was pleased with himself. “Ergo! Listen, Mate,” he began, “I’m so flipping enormously pleased with myself I can’t begin to tell you!” He stood the slugs (in a manner of speaking) in a horseshoe shape, and pulled The Wheels out into the centre of the group. They were as I described before – a skateboard, at the back of which sat a small, boredlooking woodland creature called Kevin. It perched on a sort of tennis umpire’s stool. A trolley of onions was attached at the rear. “This,” Mr F explained, “is the historic moment when I reveal to you the means by which you will transcend an entire evolutionary stage! I present to you the invention by which I hope I shall be remembered when I’m dead, or hopefully even earlier: Nige’s Wheels!” he announced. “Hop in, Ergo!” Ergo mounted (in a manner of speaking) the slug tray part of the apparatus. “Press the green button, to start the power!” urged Nige. 16