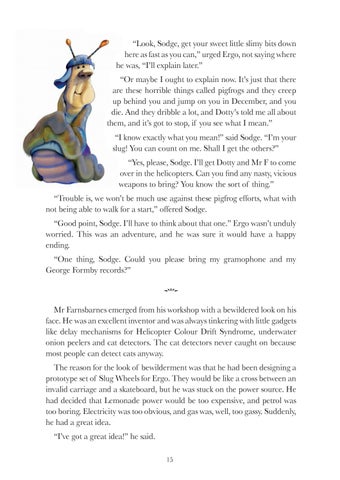 “Look, Sodge, get your sweet little slimy bits down here as fast as you can,” urged Ergo, not saying where he was, “I’ll explain later.” “Or maybe I ought to explain now. It’s just that there are these horrible things called pigfrogs and they creep up behind you and jump on you in December, and you die. And they dribble a lot, and Dotty’s told me all about them, and it’s got to stop, if you see what I mean.” “I know exactly what you mean!” said Sodge. “I’m your slug! You can count on me. Shall I get the others?” “Yes, please, Sodge. I’ll get Dotty and Mr F to come over in the helicopters. Can you find any nasty, vicious weapons to bring? You know the sort of thing.” “Trouble is, we won’t be much use against these pigfrog efforts, what with not being able to walk for a start,” offered Sodge. “Good point, Sodge. I’ll have to think about that one.” Ergo wasn’t unduly worried. This was an adventure, and he was sure it would have a happy ending. “One thing, Sodge. Could you please bring my gramophone and my George Formby records?” 5 Mr Farnsbarnes emerged from his workshop with a bewildered look on his face. He was an excellent inventor and was always tinkering with little gadgets like delay mechanisms for Helicopter Colour Drift Syndrome, underwater onion peelers and cat detectors. The cat detectors never caught on because most people can detect cats anyway. The reason for the look of bewilderment was that he had been designing a prototype set of Slug Wheels for Ergo. They would be like a cross between an invalid carriage and a skateboard, but he was stuck on the power source. He had decided that Lemonade power would be too expensive, and petrol was too boring. Electricity was too obvious, and gas was, well, too gassy. Suddenly, he had a great idea. “I’ve got a great idea!” he said. 15