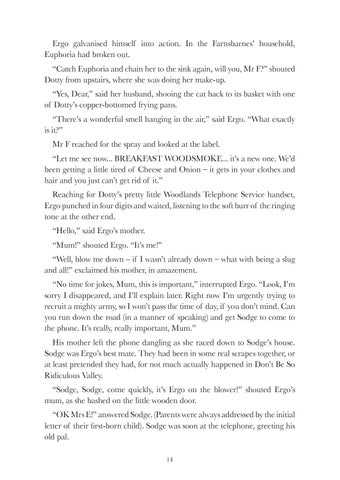 Ergo galvanised himself into action. In the Farnsbarnes’ household, Euphoria had broken out. “Catch Euphoria and chain her to the sink again, will you, Mr F?” shouted Dotty from upstairs, where she was doing her make-up. “Yes, Dear,” said her husband, shooing the cat back to its basket with one of Dotty’s copper-bottomed frying pans. “There’s a wonderful smell hanging in the air,” said Ergo. “What exactly is it?” Mr F reached for the spray and looked at the label. “Let me see now... BREAKFAST WOODSMOKE... it’s a new one. We’d been getting a little tired of Cheese and Onion – it gets in your clothes and hair and you just can’t get rid of it.” Reaching for Dotty’s pretty little Woodlands Telephone Service handset, Ergo punched in four digits and waited, listening to the soft burr of the ringing tone at the other end. “Hello,” said Ergo’s mother. “Mum!” shouted Ergo. “It’s me!” “Well, blow me down – if I wasn’t already down – what with being a slug and all!” exclaimed his mother, in amazement. “No time for jokes, Mum, this is important,” interrupted Ergo. “Look, I’m sorry I disappeared, and I’ll explain later. Right now I’m urgently trying to recruit a mighty army, so I won’t pass the time of day, if you don’t mind. Can you run down the road (in a manner of speaking) and get Sodge to come to the phone. It’s really, really important, Mum.” His mother left the phone dangling as she raced down to Sodge’s house. Sodge was Ergo’s best mate. They had been in some real scrapes together, or at least pretended they had, for not much actually happened in Don’t Be So Ridiculous Valley. “Sodge, Sodge, come quickly, it’s Ergo on the blower!” shouted Ergo’s mum, as she bashed on the little wooden door. “OK Mrs E!” answered Sodge. (Parents were always addressed by the initial letter of their first-born child). Sodge was soon at the telephone, greeting his old pal. 14