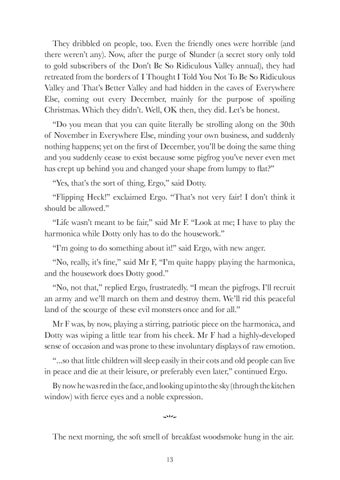 They dribbled on people, too. Even the friendly ones were horrible (and there weren’t any). Now, after the purge of Slunder (a secret story only told to gold subscribers of the Don’t Be So Ridiculous Valley annual), they had retreated from the borders of I Thought I Told You Not To Be So Ridiculous Valley and That’s Better Valley and had hidden in the caves of Everywhere Else, coming out every December, mainly for the purpose of spoiling Christmas. Which they didn’t. Well, OK then, they did. Let’s be honest. “Do you mean that you can quite literally be strolling along on the 30th of November in Everywhere Else, minding your own business, and suddenly nothing happens; yet on the first of December, you’ll be doing the same thing and you suddenly cease to exist because some pigfrog you’ve never even met has crept up behind you and changed your shape from lumpy to flat?” “Yes, that’s the sort of thing, Ergo,” said Dotty. “Flipping Heck!” exclaimed Ergo. “That’s not very fair! I don’t think it should be allowed.” “Life wasn’t meant to be fair,” said Mr F. “Look at me; I have to play the harmonica while Dotty only has to do the housework.” “I’m going to do something about it!” said Ergo, with new anger. “No, really, it’s fine,” said Mr F, “I’m quite happy playing the harmonica, and the housework does Dotty good.” “No, not that,” replied Ergo, frustratedly. “I mean the pigfrogs. I’ll recruit an army and we’ll march on them and destroy them. We’ll rid this peaceful land of the scourge of these evil monsters once and for all.” Mr F was, by now, playing a stirring, patriotic piece on the harmonica, and Dotty was wiping a little tear from his cheek. Mr F had a highly-developed sense of occasion and was prone to these involuntary displays of raw emotion. “...so that little children will sleep easily in their cots and old people can live in peace and die at their leisure, or preferably even later,” continued Ergo. By now he was red in the face, and looking up into the sky (through the kitchen window) with fierce eyes and a noble expression. 5 The next morning, the soft smell of breakfast woodsmoke hung in the air. 13