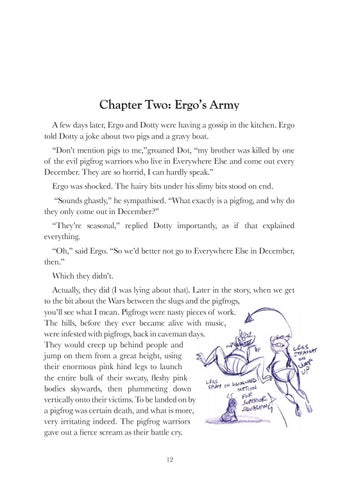 Chapter Two: Ergo’s Army A few days later, Ergo and Dotty were having a gossip in the kitchen. Ergo told Dotty a joke about two pigs and a gravy boat. “Don’t mention pigs to me,”groaned Dot, “my brother was killed by one of the evil pigfrog warriors who live in Everywhere Else and come out every December. They are so horrid, I can hardly speak.” Ergo was shocked. The hairy bits under his slimy bits stood on end. “Sounds ghastly,” he sympathised. “What exactly is a pigfrog, and why do they only come out in December?” “They’re seasonal,” replied Dotty importantly, as if that explained everything. “Oh,” said Ergo. “So we’d better not go to Everywhere Else in December, then.” Which they didn’t. Actually, they did (I was lying about that). Later in the story, when we get to the bit about the Wars between the slugs and the pigfrogs, you’ll see what I mean. Pigfrogs were nasty pieces of work. The hills, before they ever became alive with music, were infested with pigfrogs, back in caveman days. They would creep up behind people and jump on them from a great height, using their enormous pink hind legs to launch the entire bulk of their sweaty, fleshy pink bodies skywards, then plummeting down vertically onto their victims. To be landed on by a pigfrog was certain death, and what is more, very irritating indeed. The pigfrog warriors gave out a fierce scream as their battle cry. 12