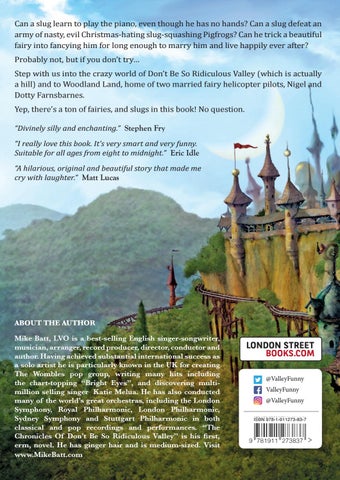 Can a slug learn to play the piano, even though he has no hands? Can a slug defeat an army of nasty, evil Christmas-hating slug-squashing Pigfrogs? Can he trick a beautiful fairy into fancying him for long enough to marry him and live happily ever after? Probably not, but if you don’t try…

Step with us into the crazy world of Don’t Be So Ridiculous Valley (which is actually a hill) and to Woodland Land, home of two married fairy helicopter pilots, Nigel and Dotty Farnsbarnes. Yep, there’s a ton of fairies, and slugs in this book! No question. “Divinely silly and enchanting.” Stephen Fry

“I really love this book. It’s very smart and very funny. Suitable for all ages from eight to midnight.” Eric Idle “A hilarious, original and beautiful story that made me cry with laughter.” Matt Lucas

ABOUT THE AUTHOR Mike Batt, LVO is a best-selling English singer-songwriter, musician, arranger, record producer, director, conductor and author. Having achieved substantial international success as a solo artist he is particularly known in the UK for creating The Wombles pop group, writing many hits including the chart-topping “Bright Eyes”, and discovering multimillion selling singer Katie Melua. He has also conducted many of the world’s great orchestras, including the London Symphony, Royal Philharmonic, London Philharmonic, Sydney Symphony and Stuttgart Philharmonic in both classical and pop recordings and performances. “The Chronicles Of Don’t Be So Ridiculous Valley” is his first, erm, novel. He has ginger hair and is medium-sized. Visit www.MikeBatt.com 156